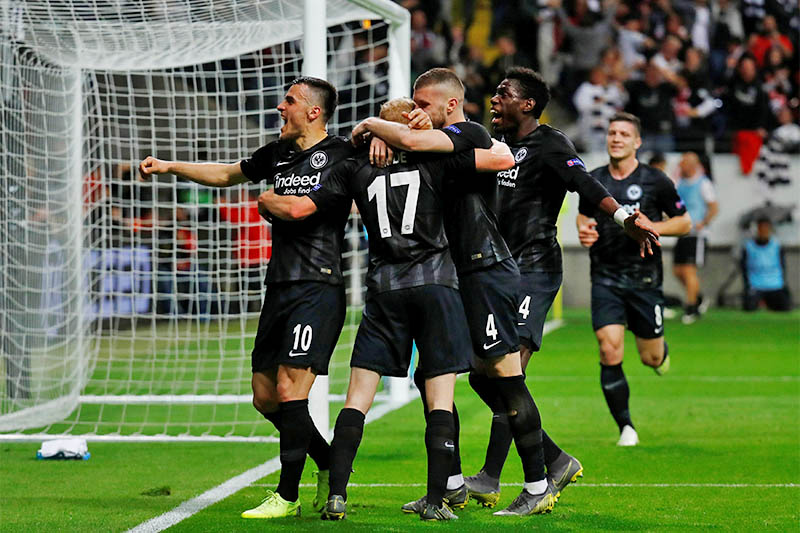 Eintracht Frankfurt's Sebastian Rode celebrates scoring their second goal with team mates. Photo: Reuters
BERLIN: Eintracht Frankfurt beat Benfica 2-0 on Thursday to overturn a 4-2 first leg deficit and advance to the Europa League last four on the away goal rule for their first European semi-final appearance in 39 years. Goals from Filip Kostic and Sebastian Rode were enough to put them through and they will next face Chelsea, who beat Slavia Prague. Eintracht, German Cup winners last season, reached their first semi-final in a European competition since winning the UEFA Cup back in 1980 by punishing their opponents' passive approach. The Portuguese, finalists in 2013 and 2014, were largely toothless, content to sit back and soak up the pressure but with little to show for up front until after Eintracht's second goal in the 67th minute. "The whole team did it great and it was not easy," said match winner Rode. "We promised ourselves to come out fighting and to soak up the atmosphere. The fans pushed us. We are delighted to have advanced." Benfica initially did well to keep Frankfurt's attack at bay. They could do nothing though when unmarked Filip Kostic fired in on the rebound after Mijat Gacinovic's effort bounced off the post in the 37th. The German club, one of four former winners of the trophy in this season's quarter-finals, along with Chelsea, Napoli and Valencia, needed only one more goal to advance to the last four. However, it was Benfica's first leg hat-trick hero Joao Felix who came close in the 48th minute. He shook off two markers, cut back into the box from the left but his effort was deflected narrowly wide by Frankfurt defender Simon Falette. That was to be the visitors' only real chance and Rode settled the tie for the hosts when he drilled in from the edge of the box. Benfica hit the post in the 85th but could not find the goal that would send them through.
#Europa league #UEFA Cup #Benfica #Eintracht Frankfurt #Sebastian Rode #Filip Kostic
You May Also like: