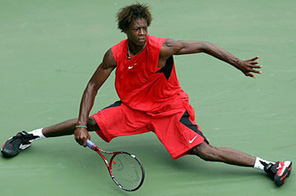 PARIS: French tennis fans will be facing a tough choice when Roger Federer takes on Gael Monfils in the French Open quarter-finals on Wednesday.
On the one hand they have the lone remaining home hope to finally put an end to 26 years of French frustration at Roland Garros since Yannick Noah won in 1983.
But on the other they have the most popular player in the game who needs just a win here on Sunday to go down in history as the greatest player of all time.
"I hope they're going to support me. I'm French. We're in France," said Monfils who destroyed Andy Roddick in straight sets late Monday to make it through to the last eight for the second year in a row.
"The French crowd is with me, but they love Federer. I hope they'll support me more because I'm French. I hope they support me." Monfils, who was doubtful for the tournament up until the last minute due to a knee injury, is only 22, but he is already a master at stirring up emotions when on the court.
Against Roddick he went through his entire gambit of screams, arm-waving and leaps to whip the fans into a frenzy much to Roddick's disgust.
Attempting the same thing against Federer would likely be fatal such is the respect the Swiss star is held in in Paris.
That was evident yet again in his thrilling five-sets win over Germany's Tommy Haas in the fourth round on Monday.
The crowd were shocked into near silence as the 27-year-old from Basel, who was taught by French coaches and who speaks near fluent French, fell two sets to love down against Germany's Tommy Haas.
They then roared their approval as he saved a break point to go 3-5 down in the third set with a magnificent forehand crosscourt winner and then dug himself out of the hole he was in to keep his Roland Garros dream alive.
Increasing the body of support for Federer is that fact that he has lost the last three finals here to Rafael Nadal including a soul-destroying straight sets hammering last year.
Yet still he soldiers on in search of the one Grand Slam title that has year after year defied his genius.
This time Nadal has gone, losing to Robin Soderling in a fourth round shocker, and Monfils is looming as a major threat.
"I know Gael now. I've played several times against him. He's always got his ups and downs. You know, his attitude, as well, is up and down. You never know what to expect with Gakl," he said.
"But his game is quite solid now. He's calmer than he was in the past when he would play his first Roland Garros tournaments.
"I think this is going to help him, because it's not been five sets each time for him for the first two rounds. I think he's fit." The two met in the semi-finals last year with Federer winning in four tough sets.

#French fans torn between Monfils and Federer
You May Also like: