Furyk optimistic as he eyes return to Bethpage 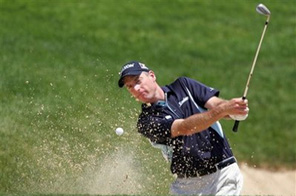 Jim Furyk hits from a bunker on the fourth hole during the final round of the Memorial golf tournament Sunday, June 7, 2009 in Dublin, Ohio. Source: AP

LAFAYETTE HILL: Jim Furyk doesn't have fond memories of the Black Course at Bethpage State Park, but he hopes changes in the course setup and hopefully better weather will boost his chances to contend at next week's U.S. Open.

Furyk missed the cut in 2002 with rounds of 73 and 80 on the difficult New York course, recalling a setup that "was definitely not good for my game."

"Of all the U.S. Opens I've played, it probably was the most problems for me," Furyk said Monday before hosting his annual Exelon Invitational charity event, which included Anthony Kim, Kenny Perry and Paul Casey, at The ACE Club in suburban Philadelphia.

Furyk comes into the Open having finished second to Tiger Woods by one shot in the Memorial on Sunday. Woods is the defending U.S. Open champion — and also won it seven years ago at Bethpage.

In his return to Bethpage, Furyk, who won the U.S. Open in 2003 at Olympia Fields near Chicago, is resting his hopes on the United States Golf Association's kinder, gentler setup in recent years — along with a weather pattern more conducive to scoring.

"I'm hoping its not winter again there, put it that way," Furyk said. "It was in the 50s, raining sideways and blowing. That's not summer, I'm sorry.

"I think, more importantly, we have a new setup for U.S. Opens the last few years. I think the positive I'm taking is going to Bethpage with an open mind thinking that it's going to be different than it was last time and hopefully a little more suited for my game."

Perry also recalls a bear of a golf course. He made the cut, finishing tied for 45th at 15-over par, but he has not forgotten the test.

"In 2002, I remember there wasn't a birdie hole out there," Perry said. "I remember the rain, the thick rough. It just seemed like if you didn't hit the fairway, every hole was a struggle."

He said he'll use a strategy similar to his approach at this year's Masters, where he lost to Angel Cabrera in a playoff, and that's to focus on getting the ball in the fairway and go from there.

"I'm going in there with a driver with a little more loft. I'm going to try to get something to act like a 2-wood, just to make sure I get the ball in play this year," he said. "That's kind of what I did at Augusta. I made sure I got it in the fairway, didn't short-side myself on the greens. I tried to give myself as many par opportunities and maybe steal a birdie here or there.

"Hopefully by the end of the day we're in good shape."

Neither Casey nor Kim, two of the PGA Tours young stars, were in the field in 2002. Neither has ever even played Bethpage Black.

"I'm excited to see it and having not experienced it in '02, I don't have, should we say, the scars from the stories I've heard and how tough it was," said Casey, ranked No. 3 in the world. "The way the USGA announced setting up the Open with the graduated rough and maybe moving some tees around, I think it will be quite a different golf course."

Casey will get his first look at the course during a practice round on Tuesday. He's already received advice from fans who have played the public course.

"I've been getting advice from the people we've been meeting out (on Tour), shaking hands and signing autographs, who are telling me about the holes," said Casey, whose best U.S. Open finish in six starts was a tie for 10th in 2007 at Oakmont. "I like the challenge, sometimes I'm good at it, sometimes I'm not but that's why we play the game. We want to test ourselves not only against the best players, but the toughest golf courses in the world and this has a reputation of being exactly that."

Kim will play a practice round Thursday before caddying for pop singer Justin Timberlake on Friday in Golf Digest's U.S. Open Challenge.

"I've heard that course is a monster," Kim said. "I'm going to spend a little time up there and get ready, maybe play Thursday, caddie Friday and head back (home) and come back on Tuesday so it doesn't beat me up too bad before the event starts."

#Furyk optimistic as he eyes return to Bethpage
You May Also like: