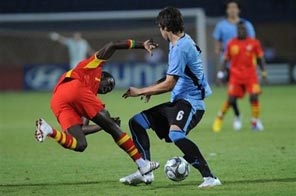 Ghana's Abeiku Quansah (left) vie for the ball with Uruguays Leandro Cabrera during their Group Group D FIFA U-20 World Cup match in port city of Ismailia, on October 2. Ghana will have revenge in mind when they confront four-time champions Brazil in the final of the Under-20 World Cup at the Cairo International Stadium on Friday. Source: AFP

CAIRO: Ghana will have revenge in mind when they confront four-time champions Brazil in the final of the Under-20 World Cup at the Cairo International Stadium here on Friday.

Sellas Tetteh's side booked their place in the tournament decider with an enterprising 3-2 semi-final victory over a dogged Hungary team and will now look to avenge Ghana's 2-1 defeat to Brazil in the 1993 competition in Sydney.

Abeiku Quansah's spectacular late strike killed off the Hungarian fightback after Dominic Adiyiah had netted his seventh and eighth goals of the competition, and Tetteh says his side are coming into form at the right time.

"What matters isn't just that we're in the final, but that we got there thanks to a great victory," he said.

"We're not surprised by our performance because we played really well in the qualifying competition in Rwanda and we've had continuity and consistency here.

"It doesn't matter who we meet next. We're 90 minutes away from lifting the trophy."

Brazil triumphed in their semi-final by a similarly slender margin, overcoming Costa Rica 1-0 via a 67th-minute volley from centre forward Alan Kardec.

Rogerio Lourenco's charges will now seek to capture the trophy for the first time since their 2003 triumph in the United Arab Emirates.

"Above all, I'm delighted that the players have achieved our goal of reaching the final," Lourenco said.

"They must be congratulated, as getting through six matches in a row is no easy feat. I know we didn't play well, but what mattered was reaching the final, nothing else."

With the tournament drawing to a close, FIFA vice-president and chairman of the organising committee Jack Warner saluted the quality of football on show.

"It's been a tournament of surprises," he said. "Costa Rica have reached the semi-finals for the very first time, despite them finishing third in the group stage.

"That's a testimony to their hard work and progression. It's also the first time that Hungary have gone so far in a FIFA youth tournament."

"We treat each match in this tournament the same, and that has enabled us to get this far," he said.

"We will spare no effort to win third place. I will give all I have to win this game. It will be a great feeling to return to our country having won our final match."

#Ghana seek Brazil revenge in U20 World Cup final
You May Also like: