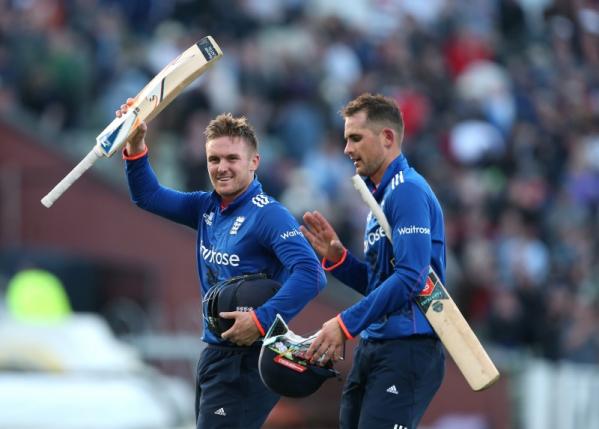 England's Jason Roy (L) and Alex Hales celebrate at the end of the match. Reuters
An England record opening partnership of 256 between Alex Hales and Jason Roy led their side to a crushing 10-wicket win over Sri Lanka in the second one-day international in Birmingham on Friday. Hales scored 133 not out and Roy an unbeaten 112 in England's highest first-wicket partnership in one-day cricket and they overhauled Sri Lanka's 254 for seven with more than 15 overs to spare. England lead the five-match series 1-0 after the first match in Nottingham was tied. Sri Lanka opted to bat after winning the toss but their total always looked inadequate on a good batting pitch at Edgbaston as England took wickets at regular intervals. Dinesh Chandimal and Angelo Mathews shared a fourth-wicket stand of 82 to give their side a platform. Mathews fell for 44, however, and Chandimal was run out for 52 by Roy who had earlier produced a brilliant piece of fielding to run out Kusal Perera. Upul Tharanga struck an unbeaten 53 to give Sri Lanka hope but England's bowlers maintained a tight grip throughout, leg-spinner Adil Rasheed the pick of the attack with figures of 2-34 from 10 overs. Hales and man-of-the-match Roy were completely in command against a toothless Sri Lanka attack. Hales smashed six sixes and 10 fours while Roy went to his second one-day international century with his fourth six before driving Seekkuge Prasanna to the cover boundary to seal victory. "It was a lot of fun. We wanted to get off to a good start. The next thing you know, we're across the line," Roy told the BBC. "It's a great buzz. There's a lot of love in the dressing- room. I'm stoked for the win." The third match of the series is in Bristol on Sunday.
#England #Sri lanka #Alex Hales #Jason Roy
You May Also like: