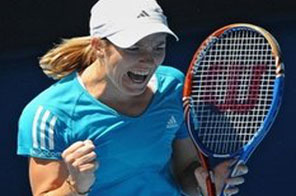 Justine Henin of Belgium celebrates winning a point against Nadia Petrova of Russia in their quarter-final match on day nine of the Australian Open in Melbourne. Henin won 7-6, 7-5 to advance to the semi-finals. Source: AFP

MELBOURNE: Wildcard Justine Henin overcame a determined Nadia Petrova 7-6 (7/3), 7-5 to reach the semi-finals of the Australian Open in her first Grand Slam since making a comeback.

The Belgian will now play either Zheng Jie or Maria Kirilenko for a place in Saturday's final after seeing off the 19th seeded Russian in one hour and 51 minutes.

The win kept alive Henin's dreams of emulating countrywoman Kim Clijsters, who won the 2009 US Open on her comeback, and vindicates her decision to return to a sport she left in May 2008 while world number one.

Henin, granted a wildcard to play here, has struggled through long matches in her last three rounds, defying her aching body and an injured left thigh to reach the last eight.

"It was difficult to find the energy," she conceded.

"But I was happy the way I came back in the second set by playing much more aggressive tennis."

By contrast Petrova has been in excellent form, highlighted by her 52 minute thrashing of Clijsters in the third round and her win over third seed Svetlana Kuznetsova in the fourth.

Henin took the early advantage when she broke Petrova in the fifth game, seizing on three double faults to go ahead 3-2.

Petrova broke back three games later but promptly lost her serve, leaving Henin to serve for the first set.

She was unable to do so as Petrova attacked, but the Belgian played a brilliant tiebreaker, opening a 6-1 lead and taking the set in 55 minutes.

The loss of the first set fired up the Russian and she skipped out to a 3-0 lead in the second, breaking Henin twice in the process.

However, the 27-year-old Henin is a renowned fighter and clawed her way back to get the set on even terms.

Then at 5-4 and Petrova serving, Henin attacked again and the Russian faltered, sending a backhand long and ensuring Henin's passage to the final four.

"I wanted to close out the match and stay in the tournament so I just went for it."

#Henin's dream run takes her into Open semi-finals
You May Also like: