I am not Xavi's replacement, says new Barca recruit Arda 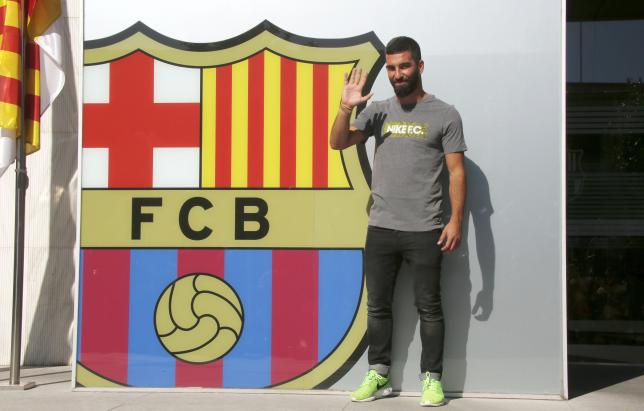 Arda Turan waves in front of the FC Barcelona headquarters before signing his contract in Barcelona, Spain July 9, 2015. REUTERS
BARCELONA: Barcelona's new midfield playmaker Arda Turan has no intention of trying to fill the boots of club legend Xavi following the decorated Spaniard's departure for Qatar at the end of last season. Turkey captain Arda joined Barca this week after four seasons at Atletico Madrid, although as things stand the 28-year-old will be unable to play in official matches until January because of a FIFA ban on registering players. "I am here to give my best and help the team, not to replace Xavi, who is irreplaceable," Arda said at his presentation news conference on Friday. "He is a unique figure not only at Barcelona but as an icon of world football," he added. "I can play better or worse but I always try to do my best. My life has always been about fighting and I want to win everything. "I am in the best team, the best stadium, and I am going to play with the best players. "I am coming here to enjoy that and to try to show the world the best of Arda." When the ban ends, Arda will face stiff competition to win a place in coach Luis Enrique's team, who won a treble of Champions League and Spanish league and Cup titles last term. Arda is a similar player to captain Andres Iniesta, while Barca's other midfielders include Ivan Rakitic, Sergio Busquets and promising youngsters Rafinha and Sergi Roberto. Arda told reporters he was not planning to go out on loan for the rest of the year following reports he might join former club Galatasaray in his native Turkey. "What is important to me is to adapt to Barca's playing style as quickly as possible," Arda said. "As soon as I signed my contract and pulled on the shirt, I started to get nervous and I wanted to start playing. I hope these six months pass quickly." Barca have International Champions Cup games against Los Angeles Galaxy, Manchester United, Chelsea and Fiorentina before they meet Europa League winners Sevilla in the European Super Cup on Aug. 11. They will begin their bid for a sixth La Liga in eight years the weekend of Aug. 22-23.
#Barcelona #Atletico Madrid #Arda Turan #Xavi
You May Also like: