India call up Pant as cover, hope Dhawan will be fit to face England 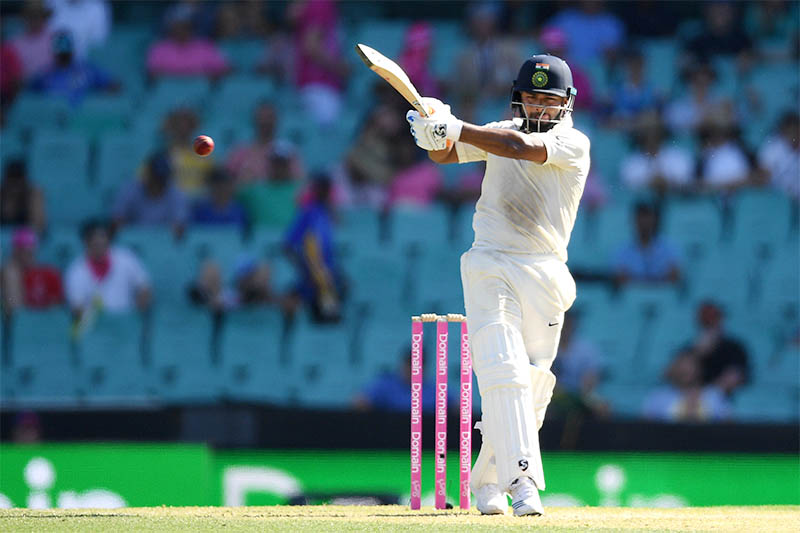 India's Rishabh Pant plays a shot to bring up his 150 runs on day two of the fourth test match between Australia and India at the SCG in Sydney, Australia, January 4, 2019. Photo: Reuters
NOTTINGHAM: Wicketkeeper-batsman Rishabh Pant will join the India team before Sunday's clash with Pakistan as cover for opener Shikhar Dhawan who will miss the next three to four games with a hand injury, assistant coach Sanjay Bangar said on Wednesday. Dhawan's injury, sustained during his match-winning century against Australia, has forced the twice champions into rejigging a settled lineup after two of their nine group matches. They remain optimistic, however, of welcoming the southpaw back before the June 30 clash against hosts and tournament favourites England. Bangar confirmed that back-up opener KL Rahul, who was picked to play at number four, will partner Rohit Sharma at the top of the order starting with Thursday's match against New Zealand. "In 10-12 days we'll be taking a call on the status of Shikhar," Bangar told reporters after the team's light practice at Trent Bridge. "If and when a replacement is required, it's always good to have the replacement player already in and practising regularly as a standby." Many pundits had questioned India's decision to leave out Pant, whose six-hitting prowess makes him a limited-overs asset, and pick Dinesh Karthik as the second wicketkeeper behind Mahendra Singh Dhoni. Like Dhawan, 21-year-old Pant is an aggressive left-hander from Delhi who has played only five one-day internationals, and was pipped by Karthik, who is 13 years older and has a reputation as a calm 'finisher'. Dhawan's absence not only denied India a left-right combination at the top but also left them without a southpaw in the existing batting lineup. "He (Pant) bats in the middle order and obviously being a left-hander it helps," Bangar said, acknowledging the benefit of having a left-right combination which forces bowlers to alter line and length. "It's always an advantage if you have a right-left combination right at the top of the order," Bangar said. "Shikhar will definitely be missed in the next three to four games but we have great back-ups for each position. With that we should be able to make it up." The former test all-rounder also explained why the team have not given up on Dhawan, who has an outstanding record in global events in England. "We've been observing him and it will take ten to twelve days until we get to know where he stands and (will) be in a better position to take a call," Bangar said. "You don't really want to rule out a precious player like Shikhar right at the time when his injury happened." All-rounder Vijay Shankar is likely to fill the void created by Rahul's move up the order but Bangar said the team had other options.
#Virat Kohli #Rishab Pant #ICC Cricket World Cup 2019
You May Also like: