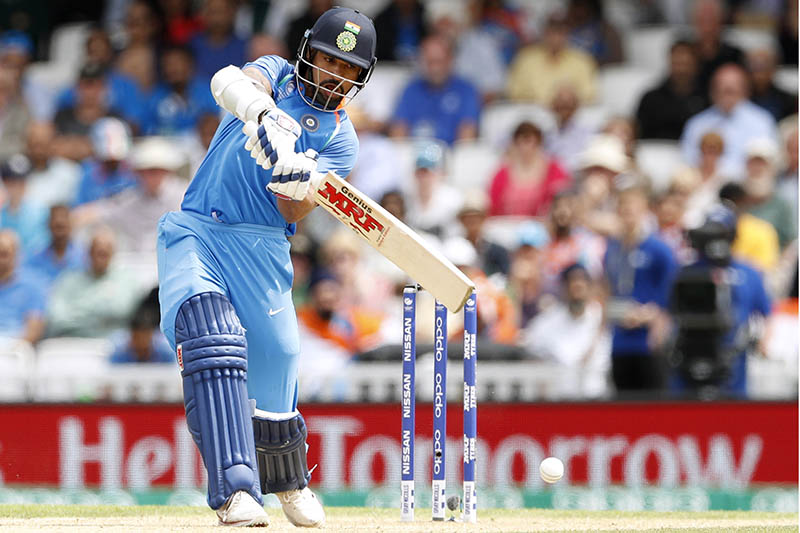 India's Shikhar Dhawan in action. Photo: Reuters
MUMBAI: India opening batsman Shikhar Dhawan has been released from the team for the first three one-day internationals against Australia to tend to his unwell wife, the country's cricket board (BCCI) said on Thursday. "Dhawan has requested to be released from the team for the first three ODIs... to attend to his wife, who is unwell," the BCCI said in a statement. The hosts would not name a replacement for the left-handed batsman, with Ajinkya Rahane and KL Rahul both able to play at the top. Dhawan had also missed the last ODI and the one-off Twenty20 in Sri Lanka to fly home to tend to his sick mother. He scored an unbeaten 132 and 49 in the first two ODIs against Sri Lanka but then managed nine runs in the third and fourth match. Virat Kohli's India will face Australia in the first ODI in Chennai on Sunday before matches in Kolkata and Indore. Dhawan is expected to return for the final two games in Bengaluru and Nagpur before the two teams take part in a three-match Twenty20 series. India squad for first three ODIs: Virat Kohli (Captain), Rohit Sharma (vice-captain), KL Rahul, Manish Pandey, Kedar Jadhav, Ajinkya Rahane, MS Dhoni (wicket-keeper), Hardik Pandya, Axar Patel, Kuldeep Yadav, Yuzvendra Chahal, Jasprit Bumrah, Bhuvneshwar Kumar, Umesh Yadav, Mohammed Shami.
#India #Australia #Shikhar Dhawan
You May Also like: