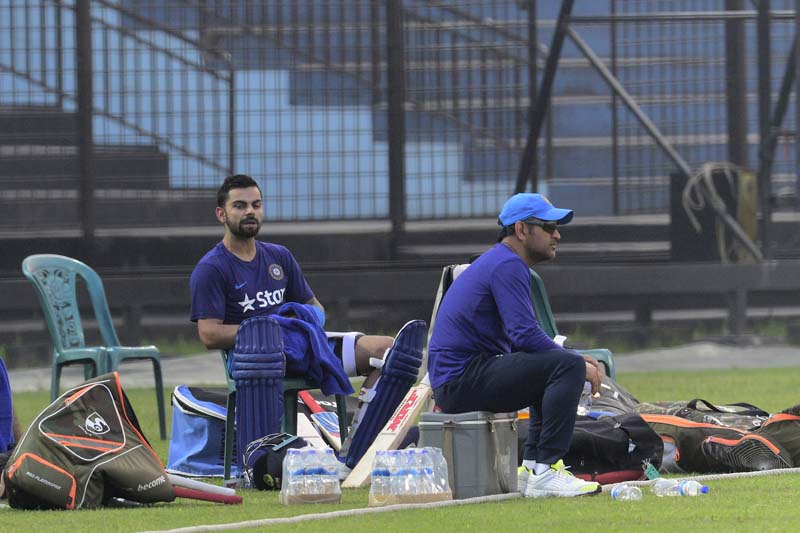 Indian cricket captain Mahendra Singh Dhoni (right) and teammate Virat Kohli attend a training session at the Khan Shaheb Osman Ali Stadium in Fatullah on February 23, 2016. Photo: AFP
Dhaka, February 23 India and Pakistan will renew cricket’s most bitter rivalry this week after a one-year gap when they face off in the Asia Cup, a contest for regional supremacy which is also a final rehearsal for the World T20. The biennial 12-day tournament begins on Wednesday night when the hosts take on India at Dhaka’s Sher-e-Bangla stadium — the venue for all the matches. Local supporters will be looking to see if Bangladesh’s sharp improvement in 50-over cricket will translate into an upturn in their performances in the shortest form of the game, with the World T20 in India only weeks away. But most eyes will be on Saturday’s glamour tie when India and Pakistan take to the field together for the first time since last year’s World Cup match in Australia. India-Pakistan showdowns usually draw hundreds of millions of television viewers, making it the biggest box office attraction in the sport. But diplomatic tensions have meant that the two teams have not played any bilateral series for more than three years and their rivalry is therefore restricted to multi-national tournaments. Pakistan, furious that India has rebuffed repeated pleas to play a bilateral series at a neutral venue, will be desperate to cause an upset against their giant neighbour. Confidence is high among Mahendra Singh Dhoni’s men after recent convincing T20 series victories over Australia and Sri Lanka. Although India are likely to give most of their players a work-out in the build-up to the World T20, team director Ravi Shastri made clear they would not be taking their foot off the gas. “Whether we play Bangladesh, Pakistan or Sri Lanka and wherever we are playing, we have to continue our good form,” Shastri told reporters in Dhaka. India’s star batsman Virat Kohli also quashed any suggestion that the team would be holding back with only weeks to go before the World T20 begins. “When I go into field I go to play cricket with bat and ball, playing with Pakistan is not different. It’s competitive and Pakistan is a strong team,” Kohli said on Tuesday. India are set to be without Dhoni for the Bangladesh opener after the skipper suffered a back spasm during a practice session on Monday.
#Pakistan #India #Virat Kohli #World Cup #Mahendra Singh Dhoni #World T20 #Sher-e-Bangla Stadium #Asia Cup
You May Also like: