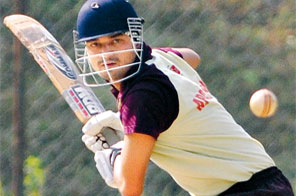 KATHMANDU: Indian Embassy, Nepal Investment Bank, Nepal SBI Bank, Laxmi
Bank, NIC Bank and Nabil Bank made it to the second round of the Soaltee Crowne Plaza Super Sixes Cricket Tournament that resumed here at the Tribhuvan University Stadium today.
Indian Embassy advanced to the second round as Group D winners after their four-wicket win over NMB Bank today. NMB made 49-5 in their allotted five overs with Mohan KC scoring unbeaten 31. Indian Embassy overcame the target losing two wickets in 3.4 overs. Amar Singh top scored for Indian Embassy with unbeaten 14 runs.
Nepal Investment cruised to the second round as Group A runners up defeating Sanima Bikash Bank by 29 runs. Nepal Investment made 72-5 thanks to a fiery 25-run knock from Niranjan Rana. Despite Padam Singh Mahata’s valliant 31 not out runs Sanima could only muster 43-1 in reply. Citizens International Bank have already qualified from the group as winners with two wins from as many matches before postponement of the event.
Nepal SBI joined Spice Nepal in the second round with a narrow seven-run win over Sunrise Bank. Nepal SBI scored 49-2 with Monish Kumar Shrestha contributing 15-ball 20 and Min Bahadur Gurung chipping in an unbeaten 17 off
eight deliveries. In reply, Sunrise made 42-3 with Prasiddha Aryal
top scoring with 14-ball 19. Spice Nepal have already made it to
the next round as the group winner with two wins in two matches.
Laxmi Bank beat Standard Chartered Bank by six runs and advanced as Group E winners. Laxmi Bank made 60-2 with Sabal
Rimal scoring an unbeaten 33 off 18 balls. Standard Chartered fell seven runs short of the target despite a valliant 16-ball 33 from Avinash Chhetri. Standard Chartered were restricted for 54-1.
NIC Bank also made it through to the next round as Group F winners. NIC registered a six-wicket win over Siddhartha Bank today. Siddhartha made 44-3 and NIC surpassed the total without losing a wicket in 3.5 overs. NIC’s Sujan Rai was forced to a mandatory retirement after scoring a magnificient 31 off 14 balls.
Nabil Bank also qualified after recording their second successive win. Nabil beat Nagarik Media by six wickets and advanced as the Group H winners. Nagarik scored 49-1 with Atish Shrestha contributing unbeaten 23 runs. In reply Amit Pokharel struck a superb 32 off 13 balls to guide Nabil to victory.
In other matches of the day, APCA Nepal suffered a heavy six-wicket loss against Bank of Asia Nepal (BoAN) in Group C while Surya Nepal defeated Soaltee Crowne Plaza by 12 runs in Group G match. APCA Nepal made 45-1 with Sandesh Katuwal scoring an unbeaten 18 off 13 balls and Naresh Pokharel chipping in with run-a-ball 17. BoAN surpassed the total without losing a wicket in 2.3 overs. Surya Nepal made 63-4 with Trishakti Rana scoring 25 off 10 balls. In reply, Soaltee could only make 51-1 despite an unbeaten 17-ball 30 from Vivek Khadka.

#Indian Embassy #SBI Bank advance
You May Also like: