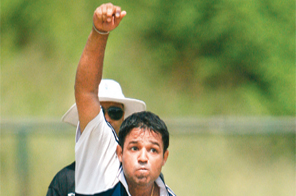 Kapil Dhurka of Rotarian of Nepal bowls in action against India during a 30-overs-a-side match at the TU Stadium in Kathmandu on Monday. Source:

KATHMANDU: The Rotarian team of India (Rotary International District 3291) defeated the Rotarians of Nepal (RI 3292) by 54 runs in a 30-over-a side match to clean sweep the International Fellowship of Cricketing Rotarians (IFCR) two-match series.
Opting to bat first after winning the toss at the Tribhuvan University Stadium on Kirtipur, the Kolkata team was all out for 161 runs in 29 overs. The Nepali team were bundled out for 107 runs in 26.4 overs in reply.
Kapil Durkha was the highest contributor for the Nepali side with unbeaten run-a-ball 36 that included three fours. Pramod Jaiswal made 12 runs while other batsmen failed to reach the double figure mark. Uttam Jain claimed three wickets for the Indian side. Ashok Moheta, Manoj Bhutoria, Chitaranjan Chaudhary, Vivek Phumra and Sunil Nahata also took a wicket each.
Earlier, Vibek Phumra smashed 39 off 40 balls while opener Chitranjan Chaudhary scored 51-ball 37 to give the Indian side a modest total. Both batsmen smashed three boundaries each. Manoj Bathoriya (15), Nirmal Bihani (13), Kaniska Baheti (12) and Sandeep Mundra (12) were the other batsmen to cross the two-digit mark. Kapil Durkha also made a significant contribution with the ball taking 4-25 off six overs and earned the man of the match award. Wicketkeeper KPR Sarthi also did some excellent works behind the wickets, stumping out four Indian batsmen.
Indian Rotarians won the first Twenty20 match by 30 runs on Sunday. Chitaranjan Chaudhary, who scored 88 runs in the series including a half century, was declared the Man of the Series. Playing in the two-day event organised by the Rotary Club of Rajdhani, Nepal have enlisted themselves among the IFCR members who will be playing the mini World Cup slated for Kolkata from December 19-21.

#Indian rotarians clean sweep cricket series
You May Also like: