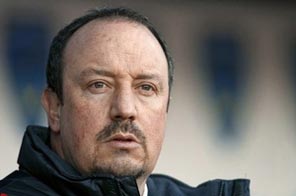 Just when Liverpool manager Rafael Benitez, seen here in 2009, thought things could not get any worse, he found himself facing up to the prospect of being without star players Fernando Torres and Steven Gerrard. Source: AFP

LONDON: Just when Liverpool manager Rafael Benitez thought things could not get any worse, he found himself facing up to the prospect of being without star players Fernando Torres and Steven Gerrard.

The pain felt around Anfield following Wednesday's shock extra-time FA Cup defeat by second division Reading, was compounded Thursday by news that Torres, Gerrard and Yossi Benayoun had all sustained injuries during the 2-1 extra-time loss.

Torres, who lasted barely half an hour at Anfield, faces the longest lay-off of the trio.

The Spain striker is set to be sidelined for six weeks with a knee injury while inspirational club captain Gerrard, substituted at half-time, is expected to be out for a fortnight with a hamstring injury.

Meanwhile, Israeli playmaker Benayoun - one of Liverpool's better players in a terrible season so far for the Merseysiders - sustained a fractured rib against Reading and could be unavailable for at least a month.

Torres is to undergo an operation but England midfielder Gerrard may not need surgery.

"Steven Gerrard and Fernando Torres both underwent scans earlier today (Thursday) after coming off in the FA Cup tie against Reading," a Liverpool spokesman said.

"Steven has a hamstring strain and will be out for a fortnight, while Fernando has torn a cartilage in his right knee. The injury will require surgery and he is expected to be sidelined for six weeks.

"Yossi Benayoun also suffered a fractured rib in the game and will be unavailable for between three and four weeks."

The trio will miss this weekend's match against Stoke and the subsequent Premier League encounters with Tottenham and Wolves but the Reds will hope to have Gerrard back in time to face Bolton on January 30.

But the extent of Torres's injury means he is set to miss next month's Merseyside derby against Everton and February's league match with Arsenal as well as the fixture with high-flyers Manchester City.

As well as being a blow to Liverpool, Torres's injury will be a concern to European champions Spain ahead of this year's World Cup finals in South Africa.

The injury setbacks came as pressure grew on Benitez, with former Liverpool captain Ronnie Whelan calling for the Spaniard to be sacked.

"He should have gone a long time ago," Whelan told the BBC. "They have got to do it now."

Liverpool started the season fancied to end the club's 20-year-wait for the English title but they are currently 12 points behind Premier League leaders Chelsea.

Benitez recently "guaranteed" the five-times European Cup winners would finish in the top four and so qualify for next season's Champions League but they are currently seventh in the table, having already crashed out of this season's tournament at the group stage.

Now the only chance Liverpool, desperate for finance but hampered by the stand-off between feuding American co-owners George Gillett and Tom Hicks, have of winning a trophy this season rests with the Europa Cup.

It was only last year that Benitez signed a contract extension that is set to keep him with Liverpool until 2014 and doubts remain over whether, even if they wanted to sack him the club would be willing to afford the multi-million pounds pay-off they would have to give the Spaniard.

A defiant Benitez, speaking after the Reading match, said he'd got used to criticism.

"For three months everyone was talking about me. At the end, as a manager you have to be disappointed but then move forward and think about Stoke on Saturday," added the Spaniard, who has been in charge at Anfield since 2004.

"We are frustrated but you have to carry on."

And as the knives were being sharpened, Benitez did at least receive support from former Liverpool striker John Aldridge.

"We can turn the tide, I don't think to get rid of Rafa now is the answer," he told Sky Sports.

#Injury blows add to Benitez's Liverpool woes
You May Also like: