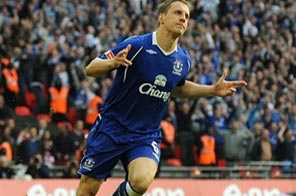 Everton's English defender Phil Jagielka celebrates after scoring the winning penalty in the FA Cup Semi-Final at Wembley Stadium in London in April. Everton's defender could be sidelined until January after undergoing a second knee operation, the Premier League side has revealed. Source: AFP

LIVERPOOL: Everton defender Phil Jagielka could be sidelined until January after undergoing a second knee operation, the Premier League side revealed on Saturday.

Jagielka, 27, has been off the pitch since damaging knee ligaments in April but had been hoping to return to action before the end of November.
However he underwent surgery again on Wednesday on a small cartilage tear and Everton manager David Moyes said his return could now be pushed back.
"Jagielka had an operation on a tear in his meniscus, which is the cartilage in his knee," said Moyes.
"We think (it has set him back) four to six weeks. He was down initially but he's on the road to recovery now."
Moyes told the official club website that striker Victor Anichebe has also suffered a complication in his recovery from a knee injury.
Anichebe has not played since February and the 21-year-old appears some way off a return to the first team.
Moyes said: "Victor's not in a good way either. He had the pin taken out four to six weeks ago which had been catching on the side of his knee.
"Now what has happened (is that) he has a massive growth of bone and has a really big knee at the moment. We don't know how long it will be."
The double blow simply adds to Everton's recent woes.
They have not won in their last seven games and also saw Mikel Arteta suffer a setback in his recovery from knee ligament damage earlier this week.

#Injury setback for Everton's Jagielka
You May Also like: