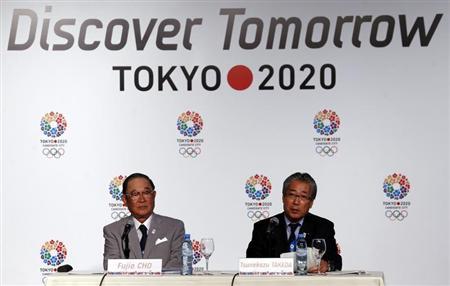 Japan Olympic Committee President Tsunekazu Takeda (R) speaks next to Toyota chairman Fujio Cho during a news conference in support of the Tokyo 2020 summer Olympics candidacy in Buenos Aires September 4, 2013. REUTERS
TOKYO: The cost of venues for the Tokyo 2020 Summer Olympics will have to be carefully watched and managed despite previous cuts, but otherwise the Japanese capital's preparations are "outstanding," IOC Vice President John Coates said on Wednesday. Japan said on Monday that the new National Stadium, the centrepiece for Tokyo's second hosting of the Summer Games, will cost more than $2 billion, nearly twice the original estimate, and be completed in May 2019, two months later than expected. "No doubt there will be some issues on the cost of the overlay," Coates told a news conference in Tokyo following an International Olympic Committee visit that included an inspection of new venue sites. "We've made some savings by moving to existing venues," he added, but said that expenses may have to be looked at again since there is the possibility of more change. Coates lauded Tokyo for embracing the IOC's push to cut costs, noting that some $1.7 billion has already been saved. "The progress to date has been outstanding," he added. Attention has focused on the new National Stadium, which will replace a now-destroyed venue built for the 1964 Summer Games and has been hit by sky rocketing costs, feuding over funding and criticism of the design as too grandiose. IOC President Thomas Bach has urged that plans for the stadium be finalised by the end of July, but Tokyo governor Yoichi Masuzoe has said he can't agree to help bear costs for the venue without a detailed explanation from the government. Masuzoe has rebelled at Tokyo being asked to foot some 50 billion yen ($406.97 million) of the bill, with the two sides taking veiled swipes at each other over the issue. Coates sidestepped direct comment on the stadium, noting that it was mainly the responsibility of the Japanese government and thus isn't bound by the cost-cutting strictures of the IOC's Agenda 2020 vision put forth last year. But Yoshiro Mori, head of Tokyo 2020 planning, said Japan wanted a stadium that could be used with pride for many years. "Whether it is expensive or inexpensive is the judgment of the people," he said, agreeing with Coates that Japan aims to use the stadium for roughly as long as it did the old one, nearly half a century. Education Minister Hakubun Shimomura told a meeting of Tokyo 2020 organisers earlier this week that Japan will stick with the basic stadium design by United Kingdom-based architect Zaha Hadid and that construction costs will run to 252 billion yen ($2.1 billion). Construction will begin in October. A retractable roof will not be added until after the Olympics and 15,000 of the stadium's 80,000 seats will be a much simpler movable design than originally proposed, both additional steps to cut costs. The stadium came in at 130 billion yen in Tokyo bid documents but cost estimates ballooned to 300 billion yen last year, prompting a modest scaling back of the futuristic design, which features two massive arches and has been compared to a spaceship and a bicycle helmet by critics.
#Japan #2020 Olympics
You May Also like: