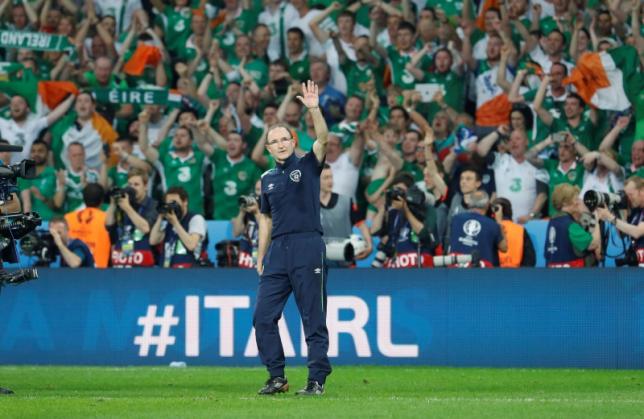 Republic of Ireland head coach Martin O'Neill celebrates at the end of the match. REUTERS
LILLE: Ireland will need to produce a similar performance to the one that helped them beat Italy on Wednesday if they are to have any chance of knocking out hosts France in the last 16 of Euro 2016, Ireland manager Martin O'Neill said. "We need a performance like tonight again to stand a chance," O'Neill told a news conference after his side's 1-0 victory over Italy in their final Group E game helped them reach the knockout stages of a European Championship for the first time. "If we can recover in time, we want to play as strongly as we did tonight," O'Neill said. Robbie Brady, who headed the 85th-minute winner from a Wes Hoolahan cross, was positive about Ireland's chances in the next round. "If we stick together like we did tonight we can take on anyone. We can go as far as we allow ourselves," Brady said. O'Neill, who said he had never been prouder of a group of players, added that his team had made great strides since he took over as Ireland manager in 2013. This improvement, as well as the staunch support from the Irish fans, had enabled them to survive a group that also included Belgium and Sweden and was arguably the most competitive in the tournament. "To have come out of the group we had is quite something. The team came out really big tonight," O'Neill said. "There has always been a great spirit among the players. But spirit alone does not win the game as you need the ability. We now have that ability," he added.
#France #Euro 2016 #ireland #Martin O'Neill
You May Also like: