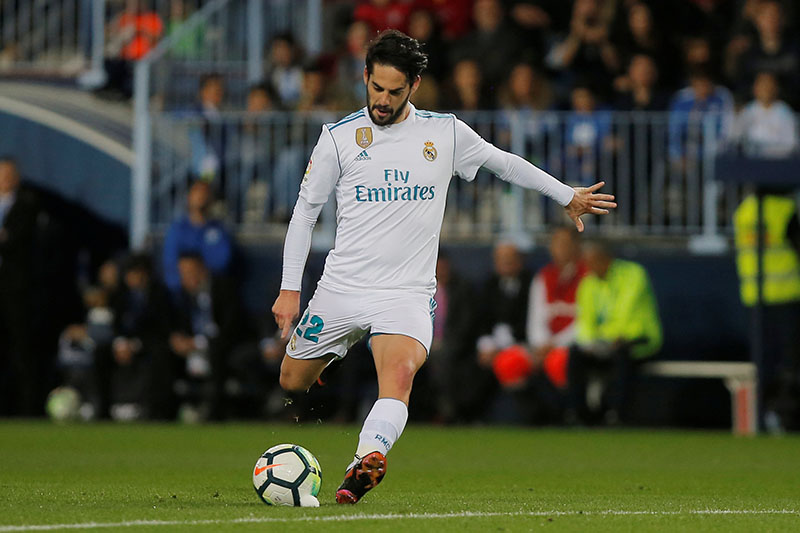 Real Madrid's Isco scores their first goal from a free kick. Photo: Reuters
MADRID: Real Madrid midfielder Isco made up for the absence of Cristiano Ronaldo by guiding his heavily-rotated side to a 2-1 win at basement club Malaga on Sunday which lifted them above Valencia and up to third in La Liga. Atletico Madrid moved back to within 11 points of runaway leaders Barcelona by comfortably beating Levante 3-0 at home as forwards Angel Correa, Antoine Griezmann and Fernando Torres were all on target. Isco curled in a fizzing free kick to break the deadlock in the 29th minute but refrained from celebrating against his hometown club. The Spain international then provided the final pass of an exquisite team move for Casemiro to tap in the second goal in the 63rd. Malaga striker Diego Rolan scored down the other end in the final minute of stoppage time after controlling the ball with his hand but there was no time left for the league's lowest-ranked club to try to add to their goal. Real had clinched last season's Liga title on their last trip to Malaga. However, coach Zinedine Zidane used this visit to rest many players after Wednesday's energy-sapping Champions League quarter-final second leg with Juventus, which his side lost 3-1 though they advanced to the semi-finals 4-3 on aggregate. The Frenchman left top scorer Ronaldo, Gareth Bale, Luka Modric and Raphael Varane at home and put Marcelo and Toni Kroos on the bench. There were rare starts for defenders Jesus Vallejo and Theo Hernandez while fringe players Borja Mayoral and Dani Ceballos came on in the second half. Isco was given a standing ovation from his former club's fans when he left the pitch for the substitutes' bench. "He deserved it, he was important for Malaga and now he's important for Madrid," Zidane told reporters. "We played very well, it's not easy to play against a team like Malaga who don't deserve to be where they are in the table. We approached the game seriously, we respected our opponents and did a good job." ROUSING RECEPTION FOR TORRES Real play again in the league on Wednesday at home to Athletic Bilbao before their Champions League semi-final first leg against Bayern Munich on April 25. Correa lashed in Atletico's opening goal against struggling Levante in the 33rd minute after a bursting run into the box by Spain forward Vitolo and Griezmann buried the ball in the top corner to score the second three minutes after halftime. Torres was given a rousing reception when he came off the bench to replace Griezmann in the second half, making his first appearance at Atletico's Wanda Metropolitano stadium since announcing that he will leave the club at the end of the season. The veteran striker got an even bigger cheer when he met Correa's cross on the volley to score the third in the 77th, his 100th goal in La Liga. "For me every game from now until the end is going to be like a party," Torres told reporters. "We saw how much the fans enjoyed it and that makes me more motivated. I hope it's not my last goal of the season and not my last game." Atletico are second in the standings on 71 points, 11 behind Barca and four ahead of Real.
#Real Madrid #Atletico Madrid #Spanish La Liga
You May Also like: