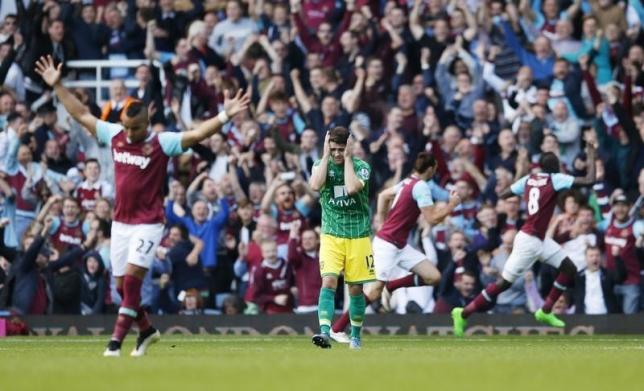 LONDON: High-flying West Ham United's Jekyll and Hyde season continued on Saturday, as they needed a stoppage-time equaliser to salvage a 2-2 draw at home against a slick Norwich City.

The London side have won only one league game out of four at home, but have a 100 percent away record with victories at big guns Arsenal, Manchester City and Liverpool.

Manager Slaven Bilic praised his players for the spirit they showed in fighting back to draw level twice in a thrilling match, but was left flummoxed at their inability to replicate their away form at home.

"Every home game we are trying to win," he told reporters, suggesting that his players need to concentrate and focus as much when they don't have possession as when they do.

"That is the department where we know we have to improve," he said.

West Ham, who stayed third in the table, squandered the opportunity to join Manchester City in second on 15 points, but could consider themselves fortunate to get anything at all.

If Norwich had taken the clear chances they created in the first half, the game would have been over as s contest by halftime.

As it was, they only scored one, through Robert Brady in the ninth minute, and the home side capitalised on that profligacy with an equaliser from Diafra Sakho late in the first half.

They repeated the great escape in even more dramatic fashion in the last minute of stoppage time when Cheikhou Kouyate popped up to score from close range after goalkeeper John Ruddy had failed to clear a cross.

That was a cruel blow for Norwich, who had looked like securing a deserved win after substitute Nathan Redmond cut inside on the left hand side of the box to curl a ferocious shot past Adrian and put them 2-1 ahead with only eight minutes left.Still, Norwich extended their unbeaten run this month to four games in all competitions and showed that 34-year old manager Alex Neil is putting together a team capable of producing controlled and creative football.

As if four goals, a host of near-misses and a last-minute equaliser weren't enough talking points, a cameo role from an injured pigeon provided another.

Play was held up midway through the second half as Norwich midfielder Jonny Howson rescued the bird from the middle of the pitch, to the warm applause.

"Jonny's from Yorkshire, he's a good boy -- he looks after the wildlife," Neil joked with reporters.