Understanding would be forged among political parties: Speaker Sapkota 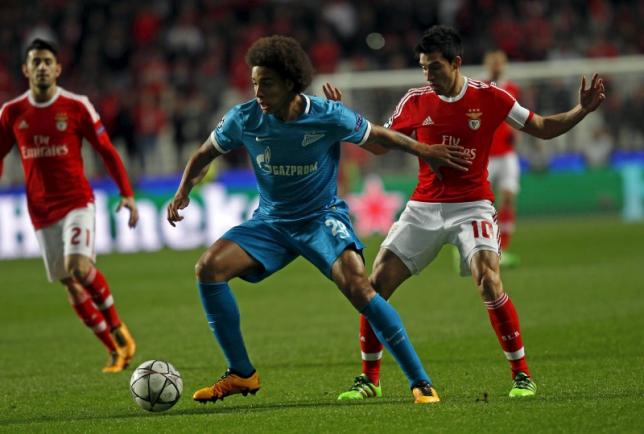 Benfica's Nicolas Gaitan (R) in action against Zenit St. Petersburg's Axel Witsel. REUTERS
LISBON: Jonas struck with a stoppage-time header to end 90 minutes of frustration for Benfica as they beat an ultra-cautious Zenit St Petersburg 1-0 at home in the first leg of their Champions League last-16 tie on Tuesday. The Russian champions, playing their first competitive match since Dec. 9, came to Lisbon with the clear intention of forcing a draw and settling the tie in what are likely to be freezing conditions at the Petrovskiy stadium on March 9. The plan, however, began to unravel when Zenit defender Domenico Criscito fouled Andre Almeida and was sent off after a second booking with the game moving into added time. Nicolas Gaitan floated the resulting free kick into the area and the Stadium of Light erupted as Jonas, the Portuguese league's topscorer with 23 goals, out jumped the defence to send his header past Yuri Lodygin. "This late goal might make our job easier in Russia, because they will have to go for it and attack from the start and we will have the possibility of exploiting the spaces they will open," said Benfica goalkeeper Julio Cesar. The first half, with Zenit unwilling to push forward and Benfica still looking edgy after their 2-1 home defeat by arch-rivals Porto on Friday, was an unsightly slog with 16 fouls, seven offsides and four bookings. Jonas, who is enjoying the best season of his career at the age of 31, had the best first-half effort when he unleashed a shot from the edge of the area but a faint touch by Nicolas Lombaerts diverted the ball centimetres wide of the post. Zenit, who have never gone beyond this stage in the competition, had to wait until the 36th minute for their first shot on goal but Hulk, who got little change out of Benfica's Eliseu, fired a low effort wide from 25 metres. Twice European champions Benfica, who last reached the quarter-finals in 2012 after beating Zenit, came to life in the second half but still struggled to create chances despite enjoying more than 60 percent of the possession. Gaitan had their best effort when he skipped past a defender but saw his shot stopped at point-blank range by Lodygin. Jonas's goal was no more than Benfica deserved and they nearly added a second in stoppage time when Andreas Samaris sent a powerful effort arrowing towards the corner, only to see it parried away by Lodygin. Zenit only genuinely tested Julio Cesar once, with an Axel Witsel effort early in the second half.
#Benfica #Zenit St Petersburg #Jonas
You May Also like: