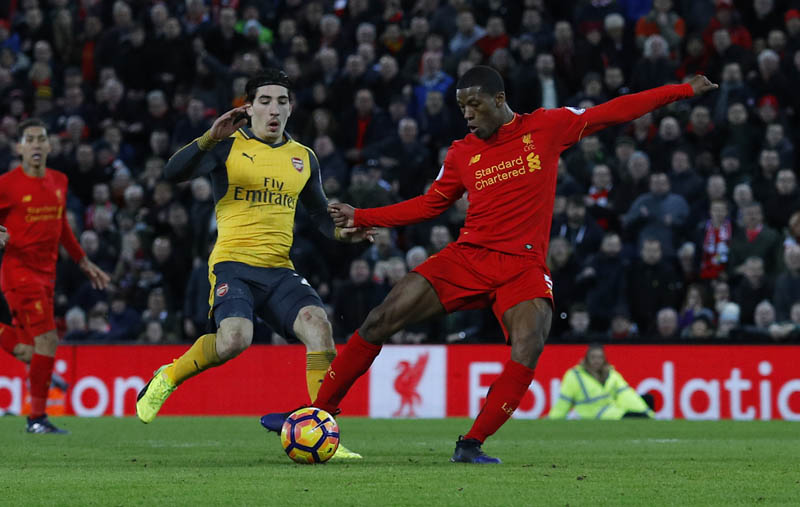 Liverpool's Georginio Wijnaldum scores their third goal. Photo: Reuters
LONDON: Liverpool defender Ragnar Klavan believes the side can qualify for next season's Champions League and hopes that the Merseysiders can become a regular feature in Europe's elite club competition. With just three wins from last nine league games, Liverpool have seen their title bid fade but back-to-back victories over Arsenal and Burnley have helped strengthen their grip on a top-four spot. "We want to be at a consistent level where we play in Europe every season... I still think we have a great chance to finish in the top four," Estonian Klavan told British media. Liverpool are fourth in the table and have a five-point lead over fifth-placed Arsenal, although the north London club have two games in hand. "I believe the Champions League is the biggest measurement of where you stand in Europe. At Liverpool, we are working every day to achieve that goal," Klavan said. "Everybody here wants to be playing in the Champions League." Liverpool's five league losses have come against teams in the bottom half of the table, including defeats to relegation-threatened sides Hull City, Swansea City and Leicester City. "If we play against lower teams that are not doing so well this season we are expected to win, but these teams still have really good quality," Klavan added. "That makes English football so attractive to watch and it also makes it difficult to be consistent in the Premier League." Liverpool's slump since the turn of the year may have dashed hopes of silverware but Klavan felt there was enough time left for the club to salvage their stuttering campaign. "The season is not a sprint, it's a marathon, and you have highs and lows. It is a long season and you only know in May how well you've really done," he said. Liverpool travel to face third-placed Manchester City on Sunday.
#Liverpool #English Premier League #Manchester City
You May Also like: