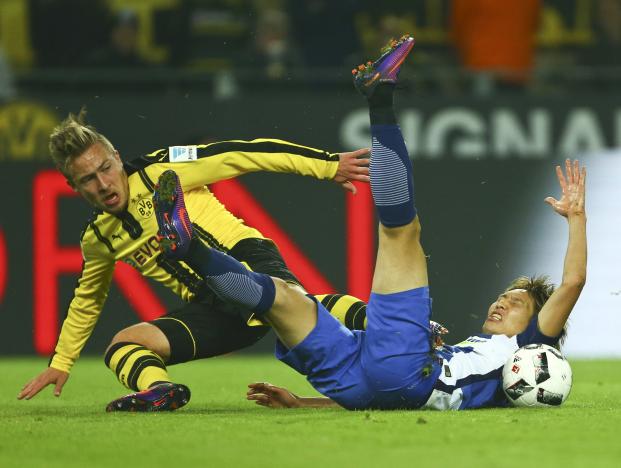 Dortmund's Felix Passlack and Berlin's Genki Haraguchi in action. REUTERS
DORTMUND: Pierre-Emerick Aubameyang missed a penalty before scoring an 80th-minute equaliser as an injury-hit Borussia Dortmund failed to win for the second straight game after stumbling to a 1-1 home draw against Hertha Berlin on Friday. Hertha's Valentin Stocker, who was sent off for a dangerous tackle in the final minutes, silenced the home crowd when he slotted in from close range after a sensational backheeled pass from Vedad Ibisevic in the 51st minute. Dortmund, who also had a player sent off when Emre Mor was dismissed for pushing an opponent, levelled with Aubameyang's sixth goal of the season to set a club record with their 25th consecutive home match without defeat. Dortmund, who are missing close to a dozen players through injury and lost to Bayer Leverkusen in their last outing, are on 13 points in third place, one behind Hertha and three off leaders Bayern Munich, who take on Eintracht Frankfurt on Saturday. "We struggled for a long time against a disciplined and tough defending opponent," Dortmund coach Thomas Tuchel, who was forced to field a starting 11 with an average age under 23, said. "The equaliser was in the air for some time. It feels as if we should have deserved to win," he said. The hosts had the upper hand throughout but struggled to break into the box in the first half. They upped the pressure after the break but Stocker struck against the run of play. Aubameyang should have levelled when he only had keeper Rune Jarstein to beat but his weak chip was palmed away with the ball then bouncing off the post. The Gabon international then had a penalty saved by Jarstein in the 76th minute before redeeming himself four minutes later when he slid in at the far post to connect with an Ousmane Dembele cutback to rescue a point for Dortmund.
#Hertha Berlin #DORTMUND #Pierre-Emerick Aubameyang
You May Also like: