Liverpool's Firmino out of Barca visit, Salah at risk 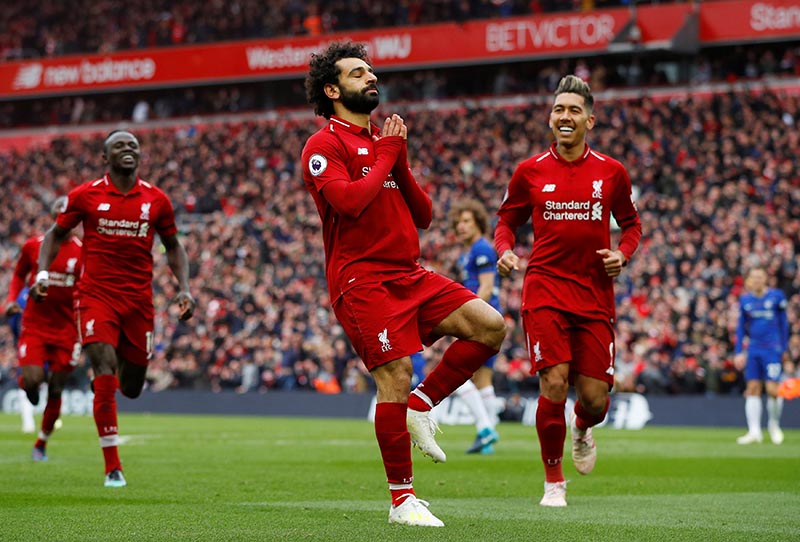 Liverpool's Mohamed Salah celebrates scoring their second goal during the Premier League match between Liverpool and Chelsea, at Anfield, in Liverpool, Britain, on April 14, 2019. Photo: Reuters
NEWCASTLE: Liverpool will be without their Brazilian forward Roberto Firmino for Tuesday's Champions League semi-final second leg against Barcelona at Anfield, manager Juergen Klopp said on Saturday. Klopp could also be without another key forward in Mohamed Salah after the Egyptian was carried off with a head injury in Saturday's 3-2 win at Newcastle. Firmino, who has a muscular injury, was not included in the match day squad for Saturday's game at St. James' Park and Klopp said he will not feature against the Spaniards as Liverpool look to overturn a 3-0 deficit from the first leg. "He will not be ready for Tuesday and the rest we will see,” said Klopp, whose side face Wolves in their final Premier League game on May 12. Klopp said it was too soon to say whether Salah would be able to play against Barca. "What I heard, he got the hip of the goalie on his head," Klopp said. "He was then on the ground and the doc had to make a decision 'on the pitch or off the pitch', and the decision was off the pitch. We accept that of course. "When we came in he was sitting in the dressing room watching the game on television. So he was then fine, but of course we have to wait. He got a proper knock, obviously, in that situation." Divock Origi, who grabbed the 86th minute winner at Newcastle, could start against Barca while Daniel Sturridge, who started on Saturday, would be another option.
#Barcelona FC #Champions League #Lionel Messi #English Premier League #Liverpool FC #Juergen Klopp
You May Also like: