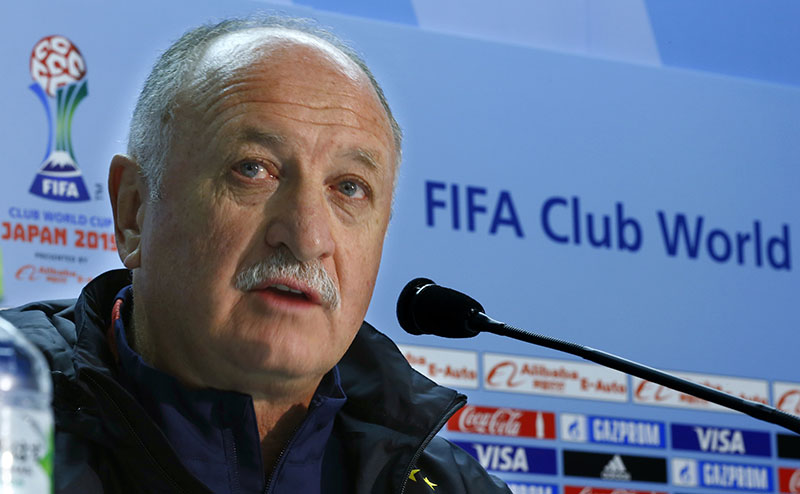 FILE - Guangzhou Evergrande FC coach Luiz Felipe Scolari of Brazil speaks during a press conference in Yokohama, near Tokyo, on Wednesday, December 16, 2015. Photo: AP
The draw has pitted the Chinese powerhouse against Hong Kong club Eastern FC, whose coach Chan Yuen-ting became the first woman to lead a men's team to a title in a professional top flight league when Eastern won the 2016 Hong Kong Premier League. On February 22, Eastern will play its first ever game in the Asian Champions League against Guangzhou in the southern Chinese city, just 75 miles (120 Kilometers) away from Hong Kong, in front of over 40,000 fans. "The Asian Champions League is a valuable opportunity for us to learn from opponents like Guangzhou and improve ourselves," Chan told Associated Press. Scolari, who led Brazil to the 2002 World Cup and Portugal to the final of the 2004 European Championships, is the most famous and decorated male coach that a female has ever pitted wits against. "I am happy to meet Scolari," said Chan."This is my great honor to play against his team. He has good experience and is very intelligent." Guangzhou has won the past six Chinese Super League titles and the 2013 and 2015 Asian championships. The ambitious club contributes numerous players to the Chinese national team rosters and is home to Brazilian internationals Paulinho and Ricardo Goulart as well as Colombian star Jackson Martinez, signed from Atletico Madrid in February for around $44 million. "We know how strong Guangzhou is," added Chan. "We will try very hard to show our quality. From the beginning, we expected this. Every game will be very tough for us. We just need to improve and prepare for the games as well as we can." Moya Dodd, vice-president of the Asian Football Confederation (AFC), is a former Australia women's player and an active proponent of the women's game. She believes that it is the former boss of English Premier League giant Chelsea who has the most to lose. "Gender aside, this is a game between one of club football's rising powers, and a team that is less resourced and less fancied," said Dodd. "On the coaches bench you have a rising star taking on one of football's old masters - a World Cup winner, no less. It's a great story for the fans, and all the pressure will be on Scolari." Mark Sutcliffe, the CEO of the Hong Kong Football Association, welcomes Chan's exploits and wishes her well against one of the most famous coaches in the game. "A match of this significance should really attract the fans and create huge excitement," said Sutcliffe. "It's an amazing story, one that you couldn't make up. Perhaps Hollywood would be interested?" There is some hope for Eastern. In the second round of qualification for the 2018 World Cup, Hong Kong met China on two occasions. Both games ended 0-0. Sutcliffe believes there could be a pattern. "It's actually a very daunting challenge. In terms of scale, resources and quality you can't compare the two sides," said Sutcliffe. "You would have to say that the odds are really stacked against Eastern. Having said that this is football and anything can happen." China does not have the famous foreign stars at Guangzhou's call and any result for Eastern would make more international headlines for Chan who was named the AFC Female Coach of the Year in November. "I have received some awards and attention from the world," said Chan. "However, it is not important what people say, I just want to stay humble and work hard and learn to be a good coach for my club." It is a big game for Hong Kong soccer too, the development of which has seen the former British colony awarded an automatic spot in the Asian Champions League. Chan's increasing fame can only be a positive for the sport. "Ms. Chan has a huge following here in Hong Kong," said Sutcliffe. "She is an inspiring figure for those of us involved in football and the accolades keep pouring in. She seems to be taking it all in her stride and remains humble and grounded." It is not just Hong Kong that would benefit from some giant-killing in February. For Dodd, this is an opportunity for a female coach to, perhaps, breakthrough what she calls "the grass ceiling". "The closer you get to the field, the harder it is for a woman," said Dodd. "It's a positive sign that growing up in the women's game can provide the experience and learning to launch a coaching career in any part of the game - including the Champions League." Chan just wants to get on with it. "I hope that my football story will encourage women coaches to go for their dream, but I believe that I am not representing anyone. I just need to do my job."
#Luiz Felipe Scolari #Guangzhou Evergrande #Asian Champions League #Scolari Faces Female Coach #Hong Kong club Eastern FC
You May Also like: