Madrid and Juventus on verge of Champions League final 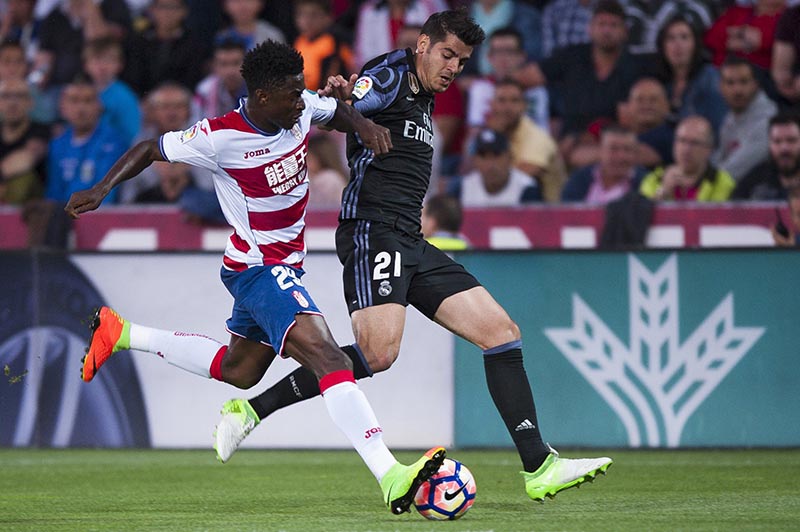 Real Madrid's Alvaro Morata (right) duels for the ball against Granada's Martin Hongla during a Spanish La Liga soccer match between Granada and Real Madrid in Granada, Spain, on Saturday, May 6, 2017. Photo: AP
MADRID: The Champions League semi-finals resume this week with Real Madrid and Juventus looking to defend big first-leg victories and book their trip to the title game in Cardiff. Madrid will carry a 3-0 advantage from the first leg when it visits Spanish rival Atletico Madrid to try to return to the final for the third time in four seasons. Juventus will hold a 2-0 cushion from the first game when it hosts Monaco to try to make it to the final for the second time in three seasons. Madrid won the title in 2014 and 2016, both times against Atletico, while Juventus lost the decider to Barcelona in 2015. The Italian club is seeking its first Champions League title in more than two decades. Atletico and Monaco will need historic comebacks to keep alive their hopes of winning Europe's top club competition for the first time. Juventus vs. Monaco It could be a momentous week for Juventus. Massimiliano Allegri's side has a chance to return to the Champions League final and clinch an unprecedented sixth Serie A title. "First we have to recover some energy and then we will focus on Monaco," Allegri said after Juventus' 1-1 draw against Torino, which still left the club in position to secure the title when it visits second-place Roma five days after the game against Monaco. "Passing the round is not a given," he said. "Roma comes after." Allegri had the luxury of resting several of his key players in the derby match and Juventus struggled at times against Torino despite playing with a numerical advantage for more than half an hour. The Bianconeri needed a stoppage-time equaliser from substitute Gonzalo Higuain as they missed extending their league record to 34 successive home wins. Juventus will again look to Higuain to lead its attack on Tuesday against Monaco, especially after the Argentina forward ended his negative streak with both goals in the first leg. Higuain hadn't previously scored in a Champions League knockout match since 2013. Monaco needs just one more goal to reach 150 for the season but at least two to have a chance of reaching the final. "We have to be confident against Juventus, even though it's going to be very difficult," coach Leonardo Jardim said. "We must keep playing good football the way we know. If we score early on, maybe that can change things." Jardim will be hoping 18-year-old striker Kylian Mbappe and top scorer Radamel Falcao do better than in the first leg, when both missed good chances to score against Gianluigi Buffon. In order to keep Mbappe as fresh as possible for the return match, Jardim named him as a substitute away to Nancy on Saturday, when Monaco won 3-0 for a club-record ninth straight league win. Monaco moved closer to the French title and reached 149 goals in all competitions this season: The ideal confidence-booster before facing Juventus. Mbappe only played 10 minutes late on against Nancy, but still had enough time to set up the third goal, while Falcao saved some valuable energy for Tuesday by coming off about 15 minutes from the end. Atletico Madrid vs Real Madrid Atletico's much-hyped defence failed in the first leg, and now it's up to the offense to try to get the team back on its feet and keep alive its hopes of returning to the Champions League final. Forwards Antoine Griezmann and Kevin Gameiro will need to regain their best form and come up with outstanding performances on Wednesday if Atletico is to overturn the three-goal deficit from the first leg. The French duo has struggled recently, scoring only three goals between them in their last six games. Griezmann, the team's top star, hasn't scored in four matches. No team has ever reversed a two-goal loss in the Champions League semi-finals. "This is probably impossible for many, but not for us," Atletico coach Diego Simeone said. The second leg will mark the final European game at the Vicente Calderon Stadium before Atletico moves into a new venue next season. It has won 29 of its last 35 European games at the stadium, with only two losses. It hasn't lost in 10 straight home games in European competitions. Madrid is trying to become the first team to have a chance to defend its title since Manchester United made it to consecutive finals in 2008-09. No team has won back-to-back titles since the competition's new format was created in 1992. Coach Zinedine Zidane will be able to count on a fresh Cristiano Ronaldo, who was rested in the team's Spanish league win over Granada on Saturday. Ronaldo scored a hat trick in the first leg against Atletico, and had five goals in the two games against Bayern Munich in the quarter-finals. The Portuguese star had scored 21 goals in 28 appearances against Atletico. Madrid has only one loss in its last 11 away game in the Champions League, with six wins and four draws. It conceded three goals four times this season, including in a 3-2 home loss to Barcelona. Playing in a record seventh straight semi-final, Madrid is two goals away from becoming the first team to score 500 in the Champions League, counting games from the group stage to the final.
You May Also like: