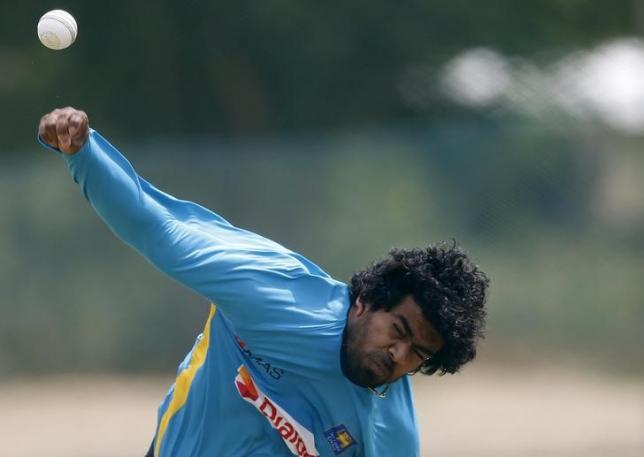 Sri Lanka's Lasith Malinga bowls during a practice session ahead of their final ODI (One Day International) cricket match against Pakistan in Dambulla August 29, 2014. REUTERS
DHAKA: Sri Lanka fast bowler Lasith Malinga marked his return from injury with four wickets against the United Arab Emirates in the Asia Cup on Thursday but did little to dispel doubts about how long he will continue playing international cricket. Malinga, Sri Lanka's Twenty20 captain, sustained a knee injury during a home series against West Indies last year and missed the team's tour of New Zealand and India, where Dinesh Chandimal deputised. Bowling for the first time in a match since November, the 32-year-old paceman with the trademark low-slung action picked up two wickets in his opening over and then returned for his second spell to add two more to his tally. The captain's inspired performance helped Sri Lanka defend a modest 129 for a 14-run victory but Malinga was not pleased with his contribution. "I am not happy," Malinga told reporters after the match. "I haven't bowled a single ball in the last three months. I just bowled in the nets in the last two days. "I am happy with the result but I think I have to do more for the team. I will try my best in the next game. (This) is not my 100 percent, maybe 60-70 percent, but still I managed to bowl yorkers and slower balls. "The team expects more than that from me." Sri Lanka will need their most potent weapon at his best during the March 8-April 3 World T20 in India if the young team are to defend their title they won two years back in Bangladesh. Malinga has been key to Sri Lanka's fortunes in limited-overs cricket with the team making the final of the 2007 and 2011 50-over World Cups, but injuries have taken a big toll on his body and forced him to give up tests in 2010. His toe-crushers and bouncers, and control during the death overs with late-swinging yorkers, has often made him unplayable. Malinga said he was in the last phase of his international career and would not rule out announcing his retirement ahead of the World Twenty20, like Sri Lanka's batting stalwarts Mahela Jayawardene and Kumar Sangakkara, who bowed out of the format in 2014. "I don't know how many months or years I will play," Malinga said, admitting that another serious injury would probably bring down the curtains.
#Sri lanka #Asia Cup #Lasith Malinga
You May Also like: