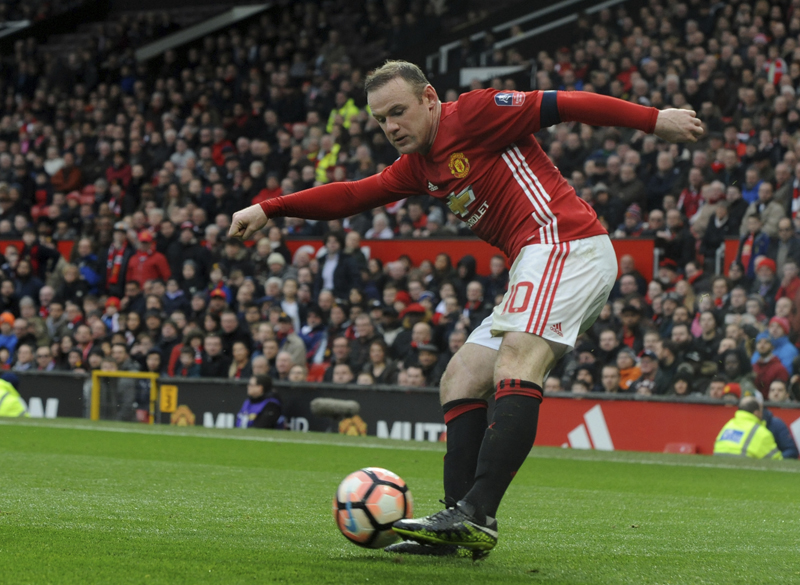 Manchester United's Wayne Rooney shoots at goal during the English FA Cup Third Round match between Manchester United and Reading at Old Trafford in Manchester, England, Saturday, Jan. 7, 2017. Photo: AP
LONDON: Manchester United skipper Wayne Rooney could miss Sunday's League Cup final against Southampton at Wembley after manager Jose Mourinho revealed that the striker was still struggling with a muscle injury. Rooney, United's all-time top scorer, has not played since the start of February and missed Sunday's FA Cup fifth-round win over Blackburn Rovers. "I don't know," Mourinho told reporters when asked if Rooney would be fit to face Southampton in the final. Mourinho also ruled Rooney and defender Phil Jones out of United's Europa League last-32 match at St Etienne on Wednesday. United have a 3-0 lead from the first leg of the tie. "Rooney is injured. Jones is injured. I don't think they will recover," the manager added. "Rooney and Jones haven't trained with the team yet so I don't think they will be there for Wednesday." United, who have won the League Cup four times before, beat Hull City 2-0 at Old Trafford before losing 2-1 away in the semi-final to progress to the final with a 3-2 aggregate score. Southampton beat Liverpool 1-0 both home and away in the semis to book their first major Wembley final since losing to Nottingham Forest in the 1979 League Cup final.
#Wayne Rooney #Manchester United #League Cup #Jose Mourinho #Wembley Stadium #Blackburn Rovers
You May Also like: