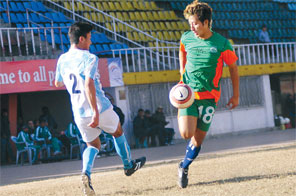 Saroj Basnet of MMC and Anil Sharma of PLA Sports Club (right) vie for the ball during the British Gurkha Cup Football Tournament Group â€˜Câ€™match at the Dasharath Stadium in Kathmandu on Sunday. Source: Rajendra Manandhar

MMC defeated PLA Sports Club 4-2 and Machhindra overcame ANFA Under 16 Team 2-1 to secure six points each in Group C with one match to go. PLA and ANFA U-16 were knocked out with two back to back defeats.

MMC’s lead, however, lasted for five minutes as Anil Sharma found the equaliser, taking the ball from midfield before beating goalie Bishal Shrestha. Sharma turned scorer to provider as he supplied a cross for Prem Lama to tap in the PLA’s second goal. MMC came close to equalising in the 37th minute but Shiva Shrestha’s header sailed inches over the bar.

MMC pressed forward and their hard work paid off with two quick goals in three minutes. In the 63rd minute Shiva Shrestha directed a corner from Jagjeet Shrestha into the nets and in the 65th Sujan Limbu scored close from the goalline in a rebound to put MMC ahead. Jagjeet Shrestha then completed the comprehensive win for MMC in the 71st minute.

Manang coach Chirring Lopsang Gurung said PLA cashed in on their defensive errors but appreciated his team’s overall display. “This is the time we need to bring back the old rhythm,” said the coach. His counterpart Meghraj KC said his players’ inexperiece cost him dear.

Earlier, Machhindra kept pressure from the outset on ANFA boys and earned a crucial win courtesy goals from Rupesh KC and Pukar Ale. ANFA U-16, who failed to score in their sixth successive match at Dasharath Stadium, reduced the deficit courtesy an own goal from Rohit Chand.

Machhindra were unlucky not to have scored early in the second minute when Rupesh hit the woodwork and Rohit also met the similar fate despite comprehensively beating ANFA goalkeeper in the 41st.

Babu Lal Hasda also came closer to scoring only for the ball to curl away from the bar in the dying moments of first half.

Machhindra finally took lead in the 55th minute on a goal from Rupesh. Rupesh scored after Naresh Pokharel’s header rebounded off the bar. The ANFA U-16 drew level thanks to Machhindra defender Rohit, who flicked the ball into his own nets while clearing a freekick from Kushal Shrestha in the 66th minute. However, five