Mancini at short odds to become next Leicester manager 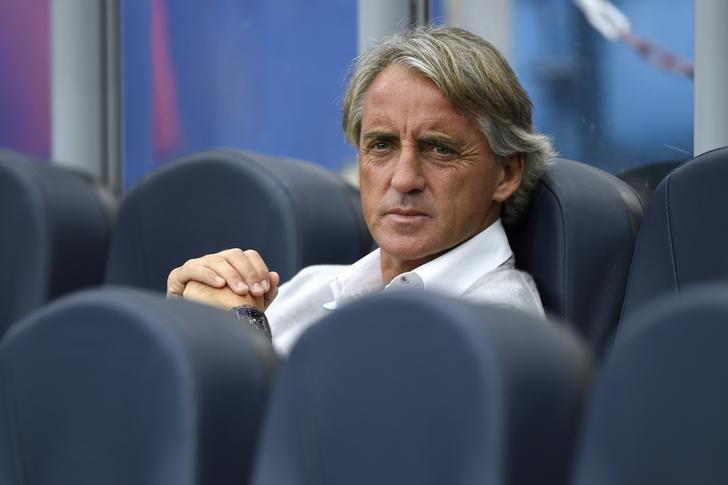 Inter Milan coach Roberto Mancini. Action Images via Reuters / Adam Holt/File Photo
Former Manchester City manager Roberto Mancini is the bookmakers' favourite to replace compatriot Claudio Ranieri as Leicester City manager after the Italian was sacked by the Premier League champions on Thursday. British bookmaker Sky Bet was offering odds of 6/4 on Mancini taking over relegation-threatened Leicester, while William Hill had the 2011-12 Premier League-winning coach at 13/8 by 1232 GMT. "I am sorry for my friend Ranieri. He will remain in the history of Leicester City, in the heart of Leicester fans and all football lovers," Mancini tweeted. Mancini, who left Inter Milan last August, won the Premier League with City in 2012. Former Leicester manager Nigel Pearson is second-favourite for the job, with Alan Pardew, Guus Hiddink, Neil Lennon, Frank de Boer and Gary Rowett the other leading contenders. Ranieri is a hugely popular figure after leading 5,000-1 outsiders Leicester to the title last season, even though the team is now just a point and a place away from relegation. In England, well-known soccer commentators were quick to criticise Ranieri's dismissal. Former England captain Gary Lineker said in a BBC radio interview: "What he did last year was extraordinary." "I think the lack of gratitude from the owners or whoever was involved in the decision beggars belief. "You could explain it in some ways as a panic decision, and for me a wrong decision. It's very sad," he said. Manchester United manager Jose Mourinho, who was sacked by Chelsea in December 2015, less than a year after winning the title, posted a message of support for Ranieri on Instagram. "Champion of England and FIFA Manager of the Year. Sacked. That's the new football, Claudio. Keep smiling AMICO (friend). Nobody can delete the history you wrote," said Mourinho, whose last game in charge of Chelsea ended in defeat by Leicester. Former Liverpool defender Jamie Carragher called the decision an "absolute joke". "I think a lot of people wouldn't have wanted to see Leicester go down with Ranieri as the manager but I think a lot of that sympathy will go now," he told Sky Sports. "They were everyone's second team but that's well gone now ... I'm devastated for him. A lot of questions have got to be asked of the owners and of the players. "I think they should have a statue of him there and I think they should start that in the morning." READ ALSO: