ManU to sell Ronaldo to Real for record sum 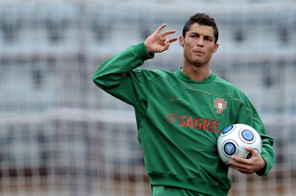 MANCHESTER: Manchester United have agreed to sell Cristiano Ronaldo to Real Madrid for a world record 80 million pounds (130 million dollars, 94 million euros), the club said Thursday. "Manchester United have received a world-record, unconditional offer of 80 million pounds for Cristiano Ronaldo from Real Madrid," said a statement on its website, under the headline "Reds accept Œ80m Ronaldo bid." The statement continued: "At Cristiano's request - who has again expressed his desire to leave - and after discussion with the player's representatives, United have agreed to give Real Madrid permission to talk to the player.
"Matters are expected to be concluded by 30 June. The club will not comment until further notice." Ronaldo has long been a target for the Spanish giants, whose returning president Florentino Perez vowed earlier this week to do "everything possible" to take the 24-year-old to the Bernabeu.
The news comes just days after Real clinched the 56 million pounds transfer of Brazilian playmaker Kaka from Italian side AC Milan as they look to compete with arch-rivals Barcelona on the domestic front and such as Manchester United and Chelsea in the Champions League.
United fans have repeatedly been told no deal had been agreed for the sale of FIFA's world player of the year in the face of regular statements from Spain the former Sporting Lisbon star was bound for the Bernabeu.
There was no immediate statement from Real Madrid, but it has been reported in England that Ronaldo, who is currently in holiday in Los Angeles, earlier this year had agreed a pre-contract with the Spanish club worth 8.3 million pounds a year over the next five years.
Ronaldo has been keen to join Real for 18 months and it took a last-ditch plea from United boss Sir Alex Ferguson to persuade him to stay at Old Trafford last year.
The former Sporting Lisbon star, who joined United for 12 million pounds in 2003, had made it clear he wanted a new challenge after winning the Champions League in 2008. But Ferguson flew to Lisbon and talked him into one more year with United.
However, Ronaldo was never fully embraced by fans or team-mates after his flirtation with Real.
His name was sung less at Old Trafford and there was a noticable drop-off in his performances. Although he scored 18 league goals and helped United to the Premier League title, Ronaldo was often an uninterested bystander for long periods in matches.
He clearly feels he is in danger of growing stale and the chance to be part of Real's new galaticos project will appeal to a player never shy of playing on his star quality.
Ferguson had previously insisted he "wouldn't sell that mob a virus" when asked about the possibility of allowing Ronaldo to join Real.

#ManU to sell Ronaldo to Real for record sum
You May Also like: