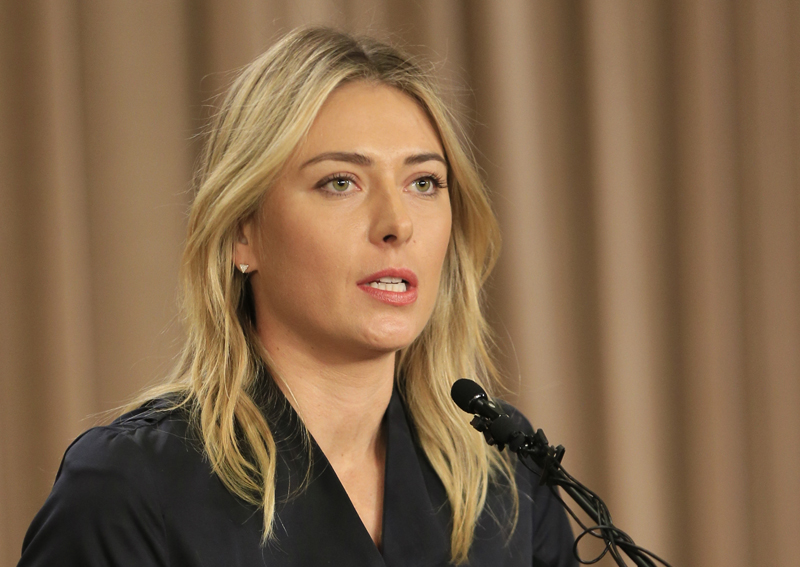 Tennis star Maria Sharapova speaks during a news conference in Los Angeles on Monday, March 7, 2016. Photo: AP/File
Maria Sharapova's racket sponsor backs French Open's decision to deny the former world number one a wildcard entry and blames the World Anti-Doping Agency (WADA) for her exclusion. Sharapova, whose career was rocked by a 15-month doping ban for consuming meldonium in 2015, returned to action last month and was widely expected to be fast-tracked into the year's second grand slam tournament. Johan Eliasch, chief executive of tennis racket firm Head, has previously criticised the inclusion of meldonium as a banned substance and the Swedish billionaire said the French Open snub was a result of WADA's poor decision to ban the substance without any tests. "I fully support the grand-slam tournament's decision," Eliasch told the Times newspaper. "I don't think there should be wild cards for doping offenders... What also disappoints me is the fact that WADA has not conducted their business properly. "What I think is still very wrong is the fact that WADA has been allowed to enforce the rule without any form of evidence or clinical testing. If WADA is to have any credibility, they have to stick to their own rules." Sharapova's exclusion was down to WADA "breaching their own rules", he said. A WADA spokesman said that the organisation had followed all the required procedures before including meldonium on their list of banned substances. "The Wada List Expert Group undertook a very thorough consultation process in 2015. Following this process, it was determined that meldonium was being used by athletes with the intent of enhancing performance," the spokesman told the paper. "Meldonium met the required criteria to be added to the list — this included evidence of its use by athletes with the intention of enhancing performance... It remains on the prohibited list." Sharapova secured a spot in the qualifying draw for Wimbledon by meeting ranking criteria but will find out if she receives a wildcard for the main draw on June 20.
#French Open #Maria Sharapova #World Anti-Doping Agency #meldonium #French Open exclusion #Maria Sharapova's racket sponsor
You May Also like: