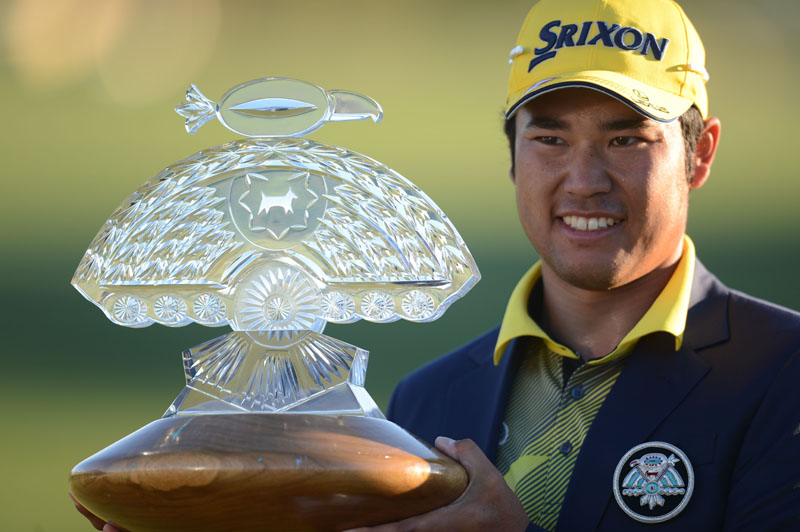 Hideki Matsuyama of Japan holds the trophy after winning the Phoenix Open golf tournament in Scottsdale on Sunday. Photo: THT
Los Angeles, February 8 Japan’s Hideki Matsuyama outlasted Rickie Fowler by tapping in for par on the fourth hole of a sudden-death playoff to win the US PGA Tour’s Phoenix Open on Sunday. The 23-year-old Matsuyama grabbed his second US tour title and improved on his runner-up finish to Brooks Koepka at last year’s tournament in the Arizona desert. In his first appearance in Phoenix two years ago he finished in tie for fourth. Matsuyama, whose only other US Tour title came at the 2014 Memorial, had two putts for the win at the fourth playoff hole — the par-four 17th — after Fowler put his shot into the water. Both Matsuyama and Fowler carded four-under 67 on Sunday to finish regulation tied on 14-under 270. America’s Fowler had a two-shot lead on the tee at 17 in regulation, but, as he would later in the playoff, he found the water. His bogey opened the door for Matsuyama to make birdie and pull even at 13-under as they headed to 18. Fowler’s tee shot on 18 then skipped through the left side bunker before caroming right and back onto the green. Matsuyama put his approach on the green to about 20 feet from the cup. Fowler then landed his approach inside Matsuyama’s ball. Matsuyama made his long birdie putt and Fowler also found some 72nd hole magic to set the stage for what would turn out to be a one-hour marathon playoff. Harris English shot a five-under 66 to finish alone in third on 272 while third-round leader Danny Lee of New Zealand shot two-over 73 to place fourth on 273. Boo Weekley had a one-under 70 to round out the top five. World No 4 Fowler was coming off a missed cut last weekend after winning the Abu Dhabi Gold Championship.
#Japan #Rickie Fowler #Hideki Matsuyama #US PGA Tour’s Phoenix Open
You May Also like: