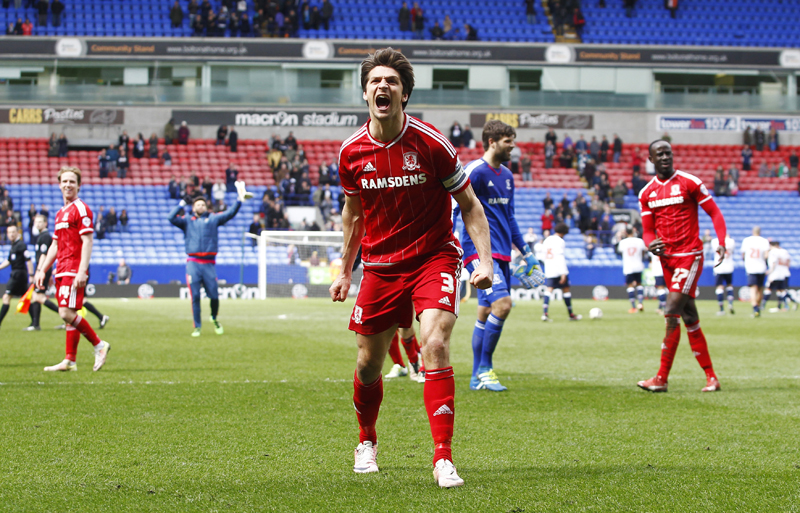 George Friend of Middlesbrough celebrates after the game on Saturday, April 16. Photo: Reuters
LONDON: Middlesbrough opened up a two-point gap at the top of the Championship when they beat relegated Bolton Wanderers 2-1 on Saturday while Burnley won by the same scoreline at Birmingham City to go second. Boro had started the day a point ahead of Brighton, who beat Fulham 5-0 on Friday but dropped to third after Burnley's win at St Andrews. Boro have 85 points from their 42 matches, Burnley are on 83 and Brighton 81. All three teams have four matches to play, with the top two going up automatically to the cash-rich Premier League and the third placed side into the playoffs for a chance of joining them. Boro's two goals, including the injury time winner, came courtesy of Jordan Rhodes. Josh Vela fired Bolton in front after 61 minutes to give the long-suffering home fans something to cheer, finding the net after a pass from former England striker Emile Heskey, but Boro equalised 12 minutes later. Rhodes scored the first from close range and then headed in the winner three minutes into stoppage time. Burnley's prolific striker Andre Gray scored his 24th goal of the season to secure their 2-1 victory at Birmingham. Gray has now been involved in more goals, 32, than any other player in the Championship this term. George Boyd scored Burnley's opener in the 31st minute with Jacques Maghoma replying for Birmingham, who had Jon Toral sent off. Derby County won 1-0 at Charton Athletic to hold on to a play-off spot along with Sheffield Wednesday, who drew 1-1 at home against Ipswich. Andre Dozzell, the 16-year-old son of former Ipswich player Jason, scored on his senior debut for the visitors. At the bottom, MK Dons' slim hopes of staying up received an improbable boost when they drew 1-1 with Preston North End despite having goalkeeper Cody Cropper sent off. With no substitutes left, striker Alex Revell stood in and saved the subsequent penalty. Rotherham stayed nine points above MK Dons after a goalless draw at Nottingham Forest. Reading manager Brian McDermott had a frustrating return to Leeds United, the club who sacked him last season. Leeds won 3-2 with Chris Wood firing in the Leeds winner after 85 minutes. At Griffin Park an injury-time goal from Scott Hogan gave Brentford a point in the 1-1 draw with Bristol City. The goal was the striker's first for the club after 18 months out with injury.
#Bolton Wanderers #Middlesbrough #Birmingham City #Emile Heskey #Leeds United
You May Also like: