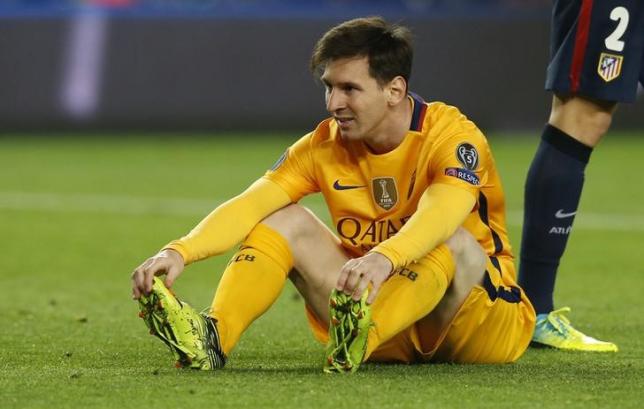 Barcelona's Lionel Messi looks dejected after a missed chance. Reuters
Barcelona can redress their stuttering domestic form by sealing their passage to the Champions League semi-finals when they visit Atletico Madrid on Wednesday. Last season's treble winners Barca are in their worst run of form in La Liga since coach Luis Enrique took charge in August 2014, losing their last two games to Real Madrid and Real Sociedad and drawing with Villarreal. Although those results have seen their La Liga lead over second-placed Atletico cut to three points, Barca are still on track to become the first Spanish team to win the treble two years in a row, with the King's Cup final against Sevilla coming up next month. The visitors take a 2-1 lead from the first leg into the return match at the Vicente Calderon, Luis Suarez's double having cancelled out Fernando Torres' opener after the former Chelsea striker was sent off in the 35th minute. "There's no time for apologies or excuses, we need results. It's not the time to sink low and think that we're on a horrible run," said Luis Enrique. "There are reasons to be optimistic although the results have not been what we want." Thomas Vermaelen is out and Rafinha doubtful due to injury but Barca top scorer Suarez returns after the Uruguayan served a suspension. Luis Enrique is also likely to recall Jordi Alba, Andres Iniesta and Ivan Rakitic after starting them on the bench in the 1-0 defeat by Sociedad at the weekend. The plan to rest those players ahead of the trip to Madrid backfired when 18-year-old Mikel Oiarzabal headed Sociedad in front in the fifth minute and Barca struggled to break down the opposition for the remainder of the game. Despite having seven shots, Lionel Messi could not find a way through and the Argentine talisman has now gone 362 minutes without scoring, his longest drought with Barca since 2011. Atletico are dreaming of a repeat of their 2014 quarter-final second leg against Barca when an early goal by Koke delivered a 1-0 win and 2-1 aggregate victory. "The stadium will be buzzing. I'm sure it's going to be a great night," said midfielder Koke. "The other day we couldn't win because of circumstances but at home we're going to turn it around." Atletico defenders Jose Gimenez and Stefan Savic are doubtful while Tiago Mendes is definitely out and Torres suspended following his dismissal at the Nou Camp.
#Barcelona #Atletico Madrid
You May Also like: