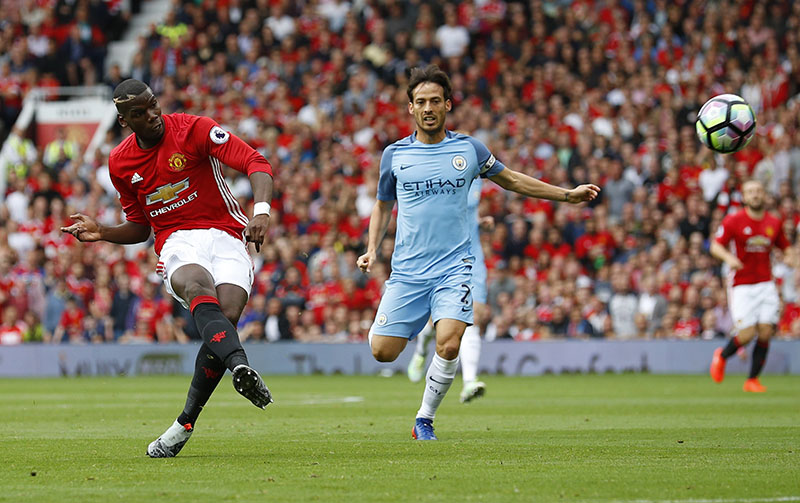 Manchester United's Paul Pogba (left) shoots the ball during the English Premier League football match against Manchester City, at Old Trafford, on Saturday, September 10, 2016. Photo: Reuters
LONDON: Manchester United manager Jose Mourinho has leapt to the defence of Paul Pogba after the under-fire midfielder came in for further criticism following a below-par performance in Monday's FA Cup quarter-final defeat at Chelsea. Pogba, who returned to United from Italian champions Juventus for a world record fee of 89 million pounds in August, has struggled to live up to his hefty price tag, scoring seven goals in 40 appearances this campaign. "I feel that the world is losing values and I am scared about the level of envy coming in. It is not Paul's fault that he gets 10 times the money some players did in the past," Mourinho told reporters on Wednesday. "It is not his fault that some pundits are in real trouble with their lives and need every coin to survive, while Paul is a multi-millionaire. "Paul reached the top and nobody gave him anything. I am really worried about the way things are going with previous generations. Envy is everywhere." Despite Pogba's performances often dividing opinion among supporters and pundits, Mourinho said he was pleased with the Frenchman's performance in this campaign and was sure that the midfielder turned a deaf ear to all the criticism. "I am very happy with Paul ... The best thing is that because of his personality he doesn't give an ass to what people say about him," Mourinho added. United host the Russian side FC Rostov at Old Trafford on Thursday and will hope to book their place in the quarter-final of the Europa League following the 1-1 first-leg draw last week. However, United will be without injured duo Wayne Rooney and Anthony Martial for the clash. Mourinho's men can qualify for next season's Champions League by winning the Europa League but the Portuguese manager was not thinking too far ahead. "We know Rostov is a very good team. We are so many matches away and some of those are against big opponents who have experience in the Champions League. 1-1 is a very doubtful result," Mourinho said.
#Manchester United #Paul Pogba #Jose Mourniho
You May Also like: