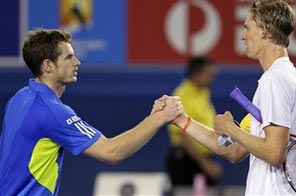 Andy Murray of Britain, left, is greeted at the net by Kevin Anderson of South Africa after winning their Men's singles first round match at the Australian Open tennis championship in Melbourne, Australia, Monday Jan. 18, 2010. Source: AP

The fifth-seeded Murray is attempting to become the British man to win a Grand Slam singles tournament since the 1930s.

Murray will play the winner of the first-round match between France's Marc Gicquel and Simone Bolelli of Italy in the second round.