Nadal needs to regain his composure 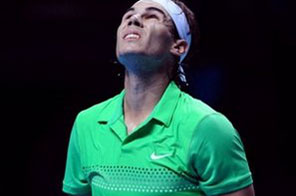 Rafael Nadal of Spain said he needed to rediscover his composure when facing crucial points and admitted he was short of confidence in his bid to claim the season-ending World Tour Finals crown. Source: AFP

LONDON: Rafael Nadal said he needed to rediscover his composure when facing crucial points and admitted he was short of confidence in his bid to claim the season-ending World Tour Finals crown.

The Spaniard lost his opening game on Monday 6-4, 6-4 to Sweden's Robin Soderling, who is only playing at London's O2 Arena as a replacement for the injured US star Andy Roddick.

World number two Nadal insisted he was not playing badly, but was not at his Open-winning very best having suffered injury problems in recent months.

"The second half of the year was difficult for me, and probably I lost a little bit of this necessary confidence and calm," he said.

"But I am working really hard to come back at my best level. I think I'm not far away from my best level. But I need a little bit more confidence and more calm.

"This year is going to be extremely hard to finish really well. But I'm going to work very hard to start next year very good. I believe in myself, that I can come back playing really well next year."

Australian Open champion Nadal admitted he was unlikely to overtake Switzerland's Roger Federer as the best player in the world.

"My level right now is not to be number one," the Mallorcan said.

"My level is to be still fighting and practicing hard to be ready as soon as possible to compete another time. Going on the court, with the full confidence in myself against everybody.

"Sport is like this. Sometimes you have some best moments; sometimes you have a little bit worse moments. This probably is one of these moments for me right now. I just accept it and work to improve the situation."

Besides the World Tour Finals - in which he must also face defending champion Novak Djokovic and Russia's Nikolay Davydenko in Group B - Nadal is also due to contest the December 4-6 Davis Cup final, in which Spain host the Czech Republic in Barcelona.

"I had a long time outside of competition. I am not feeling tired and I don't want to finish the season," the left-hander said.

"I have this one week, one week of Davis Cup, and after, one month of practice in Mallorca. That's what I have to recover my 100 percent level to start next year with a good level and chances to win in every place that I play."

Four-time French Open defending champion Nadal had had his 31-match winning streak there broken by Soderling last May, who in becoming the only man ever to beat Nadal at Roland Garros, went on to reach the final.

And the Swede repeated the upset with a tidy performance at the former Millennium Dome, at times giving the 23-year-old the run-around on the indoor hard court.

"If you are not completely calm and playing very well in that moment, it's really difficult to win."

"I managed to play really well in the important points, which is something I think you have to do if you want to beat the top guys.

"I played a lot of big matches this year, and I played well. I beat a lot of good players. So I'm sure I improved that part of my game."

#Nadal needs to regain his composure
You May Also like: