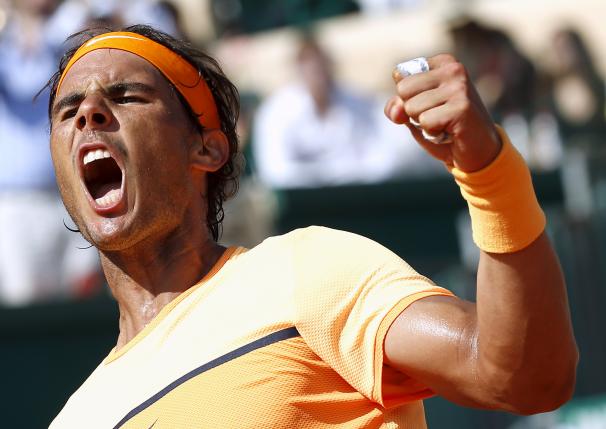 Rafael Nadal of Spain reacts after winning his match against Andy Murray of Britain. REUTERS
Rafa Nadal continued his resurgence with a thrilling 2-6 6-4 6-2 victory over world number two Andy Murray on Saturday to set up a Monte Carlo Masters final against Gael Monfils. Eight-times champion Nadal has struggled since losing the 2013 final to Novak Djokovic but overcame a strong early showing from Murray to book a spot in Sunday's final. Monfils beat eighth seed Jo-Wilfried Tsonga 6-1 6-3 to become the first Frenchman to reach the Monte Carlo final since Cedric Pioline in 2000. "It’s great to be back in the final," said Nadal. "Every year is different; I'll never be the same as I was in 2009 or 2013, I want to play better every day." Nadal started sluggishly, allowing an aggressive Murray to take the opening set before breaking serve in the seventh game of the second to take the initiative. Another Nadal break at the beginning of the third set was asign of things to come and the Spaniard demonstrated his mastery on clay as the momentum slipped away from the ill-tempered Murray to reach the 100th final of his career. "Rafa is playing better this year, his confidence is growing," said Murray. "I'm not surprised by his comeback. "I played a good match today for the most part," continued the Scot. "But you have to take your chances. It was frustrating to see it slip away." Monfils, the 13th seed, twice broke Tsonga to tear into a 3-0 lead before closing out the first set 6-1, as his opponent struggled to rouse himself. The second set continued much as the first had ended and Monfils raced into a 4-1 lead before Tsonga, perhaps drained after a testing quarter-final victory over Roger Federer, began to discover his rhythm. By then it was too late, however, and Monfils saw out the second set. "I tried to get into my game immediately and put him under pressure," said Monfils. "I'm happy to have qualified for the final. "I'm going to savour it and I hope that we'll deliver a good match on Sunday."
#Rafa Nadal #Andy Murray #Monte Carlo
You May Also like: