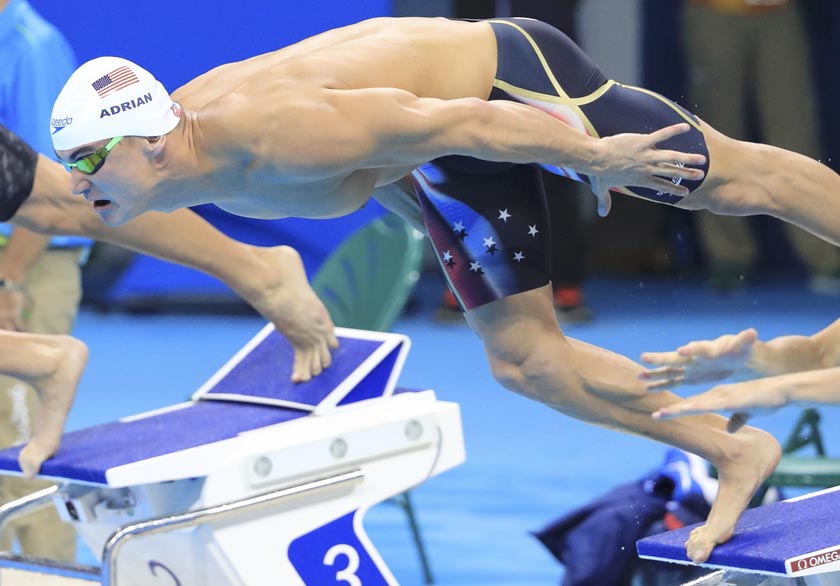 Nathan Adrian of USA competes in 100m freestyle swimming of the Rio Olympics 2016 at the Olympic Aquatics Stadium in Rio de Janeiro, Brazil, on August 9, 2016. Photo: Reuters
RIO DE JANEIRO: Olympic champion Nathan Adrian of the United States scraped into the men's 100 metres freestyle semi-finals by a matter of millimetres on Tuesday. The team's co-captain was 16th in the preliminary heats, his time of 48.58 seconds a mere three hundredths faster than Japan's Katsumi Nakamura. Only the top 16 go through to the evening semis. "It was alright," said Adrian, who had a late night on Sunday after winning the 4x100m freestyle relay in a lineup that included 19 times gold medal winner Michael Phelps. "Feeling a little rusty this morning, trying to get back into the meet after a late night. You're swimming for a lane. I'm pretty happy to get an outside lane." China's world champion Ning Zetao also cut it fine, qualifying 14th equal with France's Clement Mignon in 48.57. Australian teenager Kyle Chalmers was fastest in the heats, his time of 47.90 the third fastest recorded so far this year, with American Caeleb Dressel second in 47.91 and Britain's Scott Duncan third in 48.01. Team mate Cameron McEvoy, who boasts the year's best of 47.04, qualified fourth in 48.12 and expressed some surprise at the times being set in a pool that saw six world records smashed in the first two days. "Tonight's going to be amazing," said McEvoy, silver medallist at the 2015 world championships. "It definitely shows that the standard of international heats swimming has improved but I believe that's no indication of the potential they (rival swimmers) have." "The heats are just for getting through. For a few of them it would have been their first race too, so they are kind of seeing how they are with the taper and adjusting things as they need to be adjusted." Chalmers' time was a personal best and McEvoy recognised his junior world champion team mate was hitting top form. "He's ranked first and he's just snuck under 48 for the first time, which is amazing. And he handles it so well mentally. I've been in the same apartment as him and he's just been so easy-going. "I definitely think he's got a little bit more in the tank for tonight and potentially tomorrow night too."
#Swimming #Rio Olympics #100m freestyle #Men's 100m freestyle #Nathan Adrian #Olympics swimming
You May Also like: