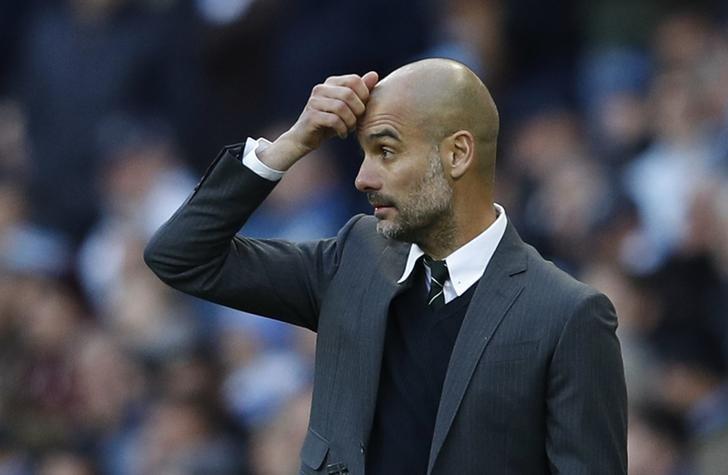 Manchester City manager Pep Guardiola. Reuters
Manchester City manager Pep Guardiola has said he is still learning to adapt to the demands of English football as he seeks to end his club's five-game winless run against rivals Manchester United in the League Cup on Wednesday. City made a blistering start to the campaign, winning their first 10 games in all competitions, but momentum has been stalled in recent weeks, and Sunday's 1-1 draw against Southampton marked the fifth consecutive game without a victory. Guardiola's side are also trailing Barcelona by five points in their Champions League group after three games. "Our last few games have been tough," Guardiola told British media. "If you are winning a game 3-0 in the last 15 or 20 minutes you can have more control and it gets a little easier. "But we were playing 10 against 11 against Barcelona, it's physical and tough in the Champions League. "After that there was the game against Southampton, when we made a mistake to go behind. Three days after Manchester United it is West Brom, then Barcelona and they are so important as well," he said. "I am still learning about football in this country." Guardiola has told his players not to lose faith in his high-risk, high-reward style of football, but has said he needs time to assess his side. "Even when we were winning 10 games in a row I felt we had to make a lot of effort to win those games. You cannot win any game here without spending a lot of energy," he added. "I am still learning how the team reacts to winning and not winning, to playing at home after a Champions League game, and I am pretty sure I need time." City, still top of the league on goal difference ahead of Arsenal and Liverpool, travel to face West Bromwich Albion in the league on Saturday.
#Southampton #Manchester United #Manchester City #Pep Guardiola
You May Also like: