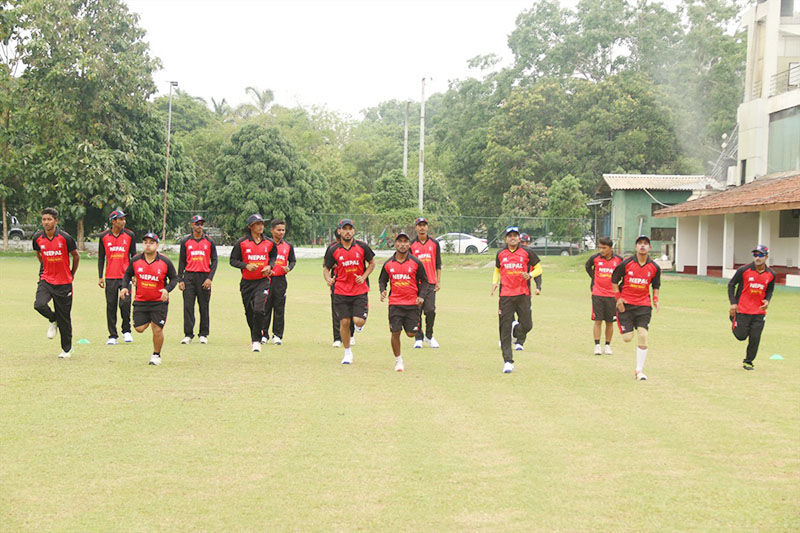 Nepal’s U-19 cricket team members jogging during a training session in Colombo, on the eve of their ACC U-19 Asia Cup match against Sri Lanka, on Wednesday, December 14, 2016. Photo courtesy: Raman Shiwakoti
Kathmandu, December 14 Nepal will face hosts Sri Lanka in the Group A match of the ACC U-19 Asia Cup at the NCC Grounds in Colombo on Thursday. This is the first meeting between Nepal and Sri Lanka in the Asia Cup as they had not meet each other in the previous two editions. In U-19 level, Nepal and Sri Lanka have met thrice, with the islanders winning all three matches of the ICC U-19 World Cup. However, the two sides are meeting for the first time in four years. Their last encounter was the ninth-place play-off match of the youth World Cup held in Australia in 2012. Sri Lanka had also defeated Nepal by 61 runs in the 2008 World Cup in Malaysia and by nine wickets during Super League round in 2000 in their home ground. However, Nepal have been able to defeat teams like South Africa and New Zealand in the past and Nepal team members were confident before travelling to Sri Lanka. Nepal  coach Binod Das and skipper Sandeep Lamichhane were optimistic for the semi-finals berths. Nepal will play against India on Friday and Malaysia two days later.
#Nepal #Colombo #Sri lanka #ACC U-19 Asia Cup #Group A match ACC U-19 Asia Cup #NCC Grounds
You May Also like: