No stopping Federer as he glides into quarters 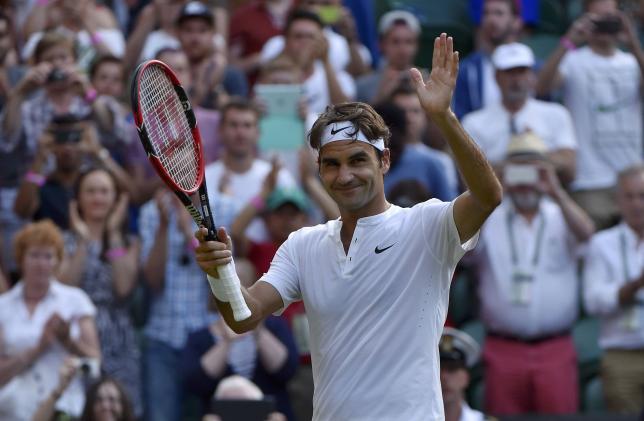 Roger Federer of Switzerland celebrates after winning his match against Roberto Bautista Agut of Spain at the Wimbledon Tennis Championships in London, July 6, 2015. REUTERS
LONDON: It was a case of 7-7-7 for Roger Federer at Wimbledon on Monday as he fired down seven aces, won seven games on the trot and sat through a seven-minute injury timeout in an otherwise serene 6-2 6-2 6-3 win over Roberto Bautista Agut. The Spaniard became the latest man to fall under Federer's serving spell as the suave Swiss flung out winners here, there and everywhere to glide into his 45th grand slam quarter-final. Such was his mastery that four days after producing an audacious "hot-dog" lob winner over Sam Querrey, he was at it again. Only this time Federer's attempt at an outrageous 'behind-the-back-volley' did not quite go to plan. With the ball hurling towards the left side of his torso, Federer wrapped his right racket arm around his back to make contact. The only problem was he misfired the ball high into the stands -- but the effort still earned wild cheers from the Centre Court crowd. His performance left John McEnroe purring "Federer is the most beautiful guy I have ever watched play the game" while the second seed's own analysis was: "I got off to a good start and kept rolling". Roll he did as breaking the Federer serve at this year's championships is turning into mission impossible as Bautista Agut became the fourth man to try and fail. The Swiss has now held strong for eight straight matches, stretching over 106 successive service games -- with Germany's Philipp Kohlschreiber the last man to get a look in during last month's first round match at the Halle Open. So what was the secret of his success? "Guys are returning terrible!" quipped Federer as he moved three wins away from a record eighth All England Club title. A match between a 17-times major champion and a Spaniard targeting a debut grand slam quarter-final appearance looked to be a mismatch on paper and so it proved. With Federer appearing to walk on air as he floated through seven successive games to go a set and 2-0 up in the second, McEnroe observed: "This is so painfully easy". What transpired next made things very painful for Bautista Agut and very easy for Federer. Running after a groundstroke, the Spaniard skidded behind the baseline and then rolled over on his right ankle as his racket went flying out his hand. He hobbled back to his chair, applied ice to the stricken area and took an injury time-out to have it manipulated by a trainer. The lengthy interruption failed to throw Bautista Agut much of a lifeline as Federer romped through the next three games to take the set and before long the Swiss had pulled the plug on his opponent's Wimbledon ambitions by breaking for a sixth time. "I got things figured out at the moment," grinned Federer. "Then again, I look at my next round opponent. Gilles Simon is one of the best return players we have in the game. I think I'll be tested a lot. So that streak's maybe coming to an end."
#Roger Federer #Wimbledon #Roberto Bautista Agut
You May Also like: