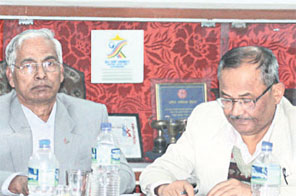 KATHMANDU: The 70th National Sports Council (NSC) board meeting today passed a budged of Rs 110 million for the 11th South Asian Games slated for January 29 to February 9 in Dhaka next year.
A meeting chaired by Youth and Sports Minister Ganesh Nepali also approved Rs 500,000 for the treatment of former Nepali taekwondo international Manju Tuladhar. The NSC had made commitment to provide the sum a week earlier.
The eighth South Asian Federation (SAF) silver medalist Tuladhar has been diagnosed with failed kidneys and is undergoing dialysis regularly. Doctors have advised her for the kidney transplantation at the earliest. Tuladhar also has won a gold medal at the second National Games in 1983 apart from bronze medals at the Asian Taekwondo Championship in 1998 and the third National Games in 1985.
Among the other major decisions taken by the board was to approve the NSC’s decision to dissolve five regional development committees and 75 district development committees.

#NSC passes Rs 110m for SA Games
You May Also like: