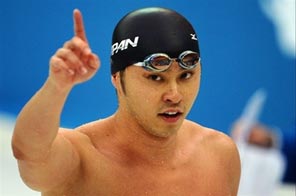 Japan's two-time double Olympic breaststroke champion Kosuke Kitajima has returned to competition after a break of 15 months on the road to the 2012 London Games. Source: AFP

TOKYO: Japan's two-time double Olympic breaststroke champion Kosuke Kitajima has returned to competition after a break of 15 months on the road to the 2012 London Games.

The 27-year-old swimmer swept all before him in time trials at the weekend in Fullerton, California, a one-hour drive from his training base in Los Angeles.
"I got exhausted but I felt fulfilled at this meeting," Kitajima said on his website after his first competition since his 100-metre and 200-metre triumphs at last year's Beijing Olympics.
"I believe this feeling of exhaustion has given me new inspiration," he said. "I may have a long road ahead of me and I think I will take my time in moving forward."
He clocked mediocre times -- 54.18sec over 100 yards on Saturday and 1min 55.42sec over 200 yards on Sunday -- at the meeting with local juniors and university students. It was the first time Kitajima competed in a 25-yard pool.
"It wasn't much of a competition. But it was good for me to take part because I could check my condition as part of training," he said.
Kitajima is also due to compete at time trials this weekend in Tokyo. Norway's Alexander Dale Oen, who finished second behind him in the 100m in Beijing, will also take part.
After retaining his Olympic titles, he moved to Los Angeles last April and resumed training at the University of Southern California. He skipped the world championships in Rome in July and August where both his 100m and 200m world records were shattered.
Australian Brenton Rickard won the 100m in 58.58, breaking the previous world record of 58.91 set by Kitajima at the Beijing Olympics.
Another Australian, Christian Sprenger, clocked 2:07.31 in the 200m semi-finals, shaving by 0.2 seconds Kitajima's mark set in Tokyo in June 2008.

#Olympic champ Kitajima back in combat mode
You May Also like: