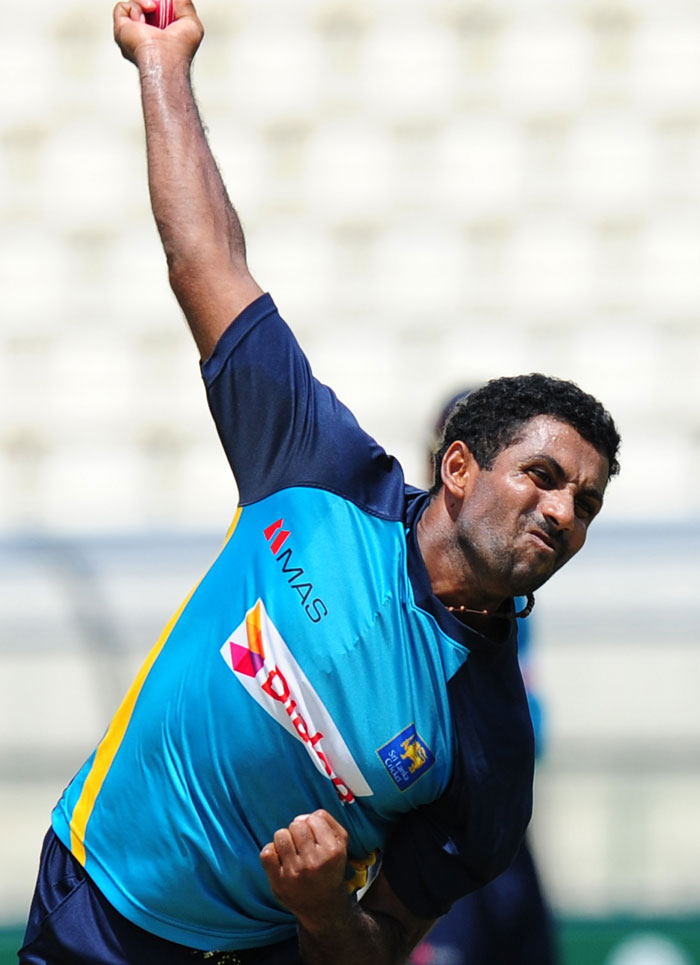 Sri Lanka’s Dhammika Prasad delivers during a practice session at the Pallekele International Cricket Stadium in Pallekele on Thursday. Photo: AFP
Pallekele, July 2 Pakistan and Sri Lanka will ring in several changes, most of them forced on them, in a bid to win the decisive third and final Test starting in Pallekele on Friday. Both sides are pulling out all the stops to break the 1-1 deadlock after Pakistan won the first Test by 10 wickets and Sri Lanka responded with a seven-wicket victory in the second. Sri Lanka will take the field without their batting greats, the retired Mahela Jayawardene and Kumar Sangakkara, who had committed himself to playing just two Tests against Pakistan and two more against India in August before retiring. Sangakkara, who has 12,305 runs from 132 Tests, will be replaced at his pivotal No 3 position by another left-hander Upul Tharanga, 30, who played the last of his 19 Tests a year ago. “It’s a strange experience to be without Mahela and Sanga, but we have some good young players who are ready to step in,” vice-captain Lahiru Thirimanne told reporters on Thursday. “Upul has been around for a long time and understands the demands of Test cricket.” Fast bowler Dushmantha Chameera, who suffered a side strain on his debut in the second Test in Colombo, will undergo a fitness test before he is picked for the crucial match. “Chameera is 50-50 for the Test,” said Thirimanne. “It is not yet certain if he will play.” Sri Lanka are planning a three-man pace attack, instead of two as in the previous Tests, on a greenish Pallekele stadium pitch that should favour seam movement on the opening day. “It’s a good wicket for batting, but it does help the fast bowlers at the start,” said Thirimanne. “We may play three seamers and just one spinner.” Veteran left-arm spinner Rangana Herath, who managed to take just two wickets in the first two Tests, is likely to be dropped, leaving young off-break bowler Tharindu Kaushal as the chief spin option. If Chameera is unfit, seamer Suranga Lakmal will make his first appearance in the series to share the new ball with Dhammika Prasad and Nuwan Pradeep. Pakistan are forced to make two changes, with pace spearhead Wahab Riaz ruled out because of injury and all-rounder Mohammad Hafeez not available since he has to undergo mandatory tests after being reported for a suspect actionin the first Test. “At least we have 11 players to pick from,” skipper Misbah-ul Haq said on Thursday. “Every player here representing Pakistan is good enough to take anyone’s place.” Left-hander Shan Masood is likely to replace Hafeez at the top of the order and left-arm seamer Rahat Ali could come in for Wahab, but skipper Misbah said the team had not been finalised. “We really need to win the game,” he said. “It’s not difficult to come back after a loss, as long as we learn from the mistakes that were made,” said Misbah. “This is the best chance for us to beat Sri Lanka because they are without their big players like Jayawardene and Sangakkara. It’s an opportunity we do not want to miss,” he added. “Hope there is no rain and we get uninterrupted play for five days. The aggressive way cricket is played these days, there is usually a positive result.” Light rain has been forecast on all five days of the Test.
#Sri Lanka cricket #Pakistan cricket #Srilanka Vs Pakistan Cricket
You May Also like: