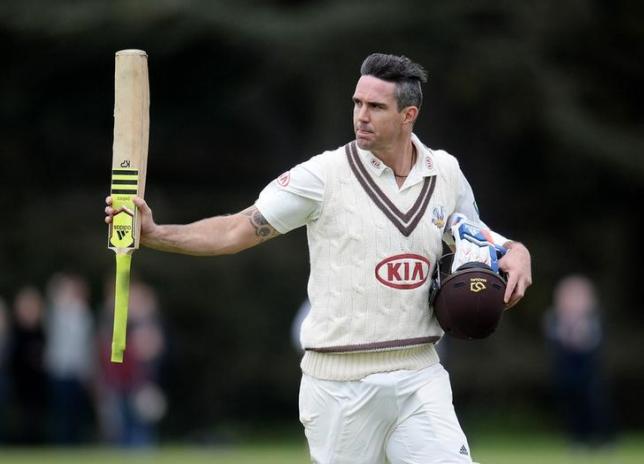 Surrey's Kevin Pietersen leaves the field after being dismissed during Oxford MCCU v Surrey at The Parks, on April 12, 2015. Photo: Reuters
SYDNEY: Former England batsman Kevin Pietersen has been charged with misconduct for his on-air comments criticising an umpiring decision while playing for the Melbourne Stars during a Big Bash League semi-final, Cricket Australia said on Friday. The controversial former England captain was wearing a microphone when he slammed the umpire's decision to turn down a caught behind appeal against Perth Scorchers batsman Sam Whiteman in the Jan. 24 Twenty20 tournament match. Match Referee David Talalla proposed a fine of A$5,000 ($3,824) for Pietersen after going through the umpires' report. "That was a shocker, an absolute shocker," Pietersen was heard saying while fielding during the Scorchers' run chase. "He says it could have been glove or pad, and I said, 'well, he's got big gloves and big pads to reach that'. "Massive nick." Pietersen accepted the charge but disputed the fine, resulting in a hearing on Thursday. Match referee Talalla stuck to the original sanction after going through additional submissions from Pietersen and video footage. Cricket Australia said Pietersen had 48 hours to decide if he wanted to appeal the match referee's decision. The 36-year-old was also on the receiving end, temporarily at least, of some criticism from Australia coach Darren Lehmann for his performances in the BBL following the semi-final defeat. "@KP24 @BBL time for stars to move KP on, spent too much money on him and didn't win. Don't want to listen to his excuses any more," Lehmann wrote in a tweet which he deleted later.
#Cricket Australia #Big Bash League #Kevin Pietersen #Melbourne Stars #David Talalla
You May Also like: