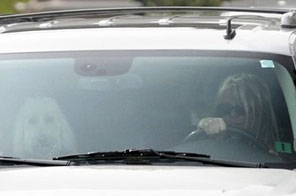 WINDERMERE: The mystery over Tiger Woods' car crash intensified Saturday when his agent called state troopers on their way to Woods' house and asked them to wait another day before speaking to him.

It was the second straight day Woods was unavailable to talk. His wife told troopers on Friday afternoon, after the world's No. 1 golfer had been treated and released from a hospital, that he was sleeping and asked that they return Saturday.

Woods is not required by law to speak to the Florida Highway Patrol because it is being investigated as a traffic accident, spokeswoman Sgt. Kim Montes said.

Woods was injured when his Cadillac SUV struck a fire hydrant and a tree just beyond his driveway at 2:25 a.m. Friday. Police said his lips were cut and blood was in his mouth when officers arrived. Police chief Daniel Saylor said Woods' wife, Elin, smashed the back window with a golf club to help get him out.

Montes said troopers were en route to Woods' $2.4 million mansion in the gated community of Isleworth when agent Mark Steinberg called dispatch and was put through to the troopers, telling them Woods and his wife were unavailable.

"I don't know what was said," Montes said.

Steinberg did not immediately respond to a text message seeking comment.

With so many questions lingering — where was he going at that hour? — and rumors circulating on the Internet, one marketing expert said silence was only stirring the pot.

"Every 10 seconds these days, people update their tweets," said David Schwab, vice president of Octagon. "People are just adding speculation and controversy. You need something to settle the ship. If he's not able to do it, find someone to do it for him."

Montes said it was "kind of normal" for Woods not to speak on Friday, the day he was treated and released from a hospital.

"It is unusual that we haven't gotten a statement," she said. "This just delays us to getting closer to the completion of the investigation."

She said troopers inside the gates "are looking for other things for their investigation," and for now, that pertains only to a traffic accident. Montes said Woods is not required to give a statement, only his driver's license, insurance and registration.

"We still are going to move forward with our crash investigation," Montes said.

The 911 tapes of the crash could be released as early as Sunday.

More than two dozen media and a cluster of TV trucks were camped outside the gates of Isleworth, an exclusive subdivision near Orlando that's set on an Arnold Palmer-designed golf course and a chain of small lakes, on Saturday, watching for any developments. Even a couple of tourists stopped by and took pictures.

Woods' news conference for the Chevron World Challenge, the tournament he hosts that benefits his foundation, had been scheduled for Tuesday afternoon. It's unclear whether he would still play, or even attend the event in Thousand Oaks, Calif.

"We do not know if Tiger is playing; we are anticipating a great week of competition," said Greg McLaughlin, the tournament director and president of his foundation.

In a telephone interview, Woods' father-in-law, radio journalist Thomas Nordegren, told The Associated Press in Stockholm that he would not discuss the accident.

"I haven't spoken to her in the last few ... " Nordegren said about his daughter, Elin, before cutting himself off. "I don't want to go into that."

Roger Federer, who has become close with Woods in recent years, said after losing in the semifinals of the ATP World Tour Finals in London, "I haven't spoken to him. I heard it's not too serious, which is a good thing."

Woods has shared precious little about his private life during his dominance of golf, which has brought him 82 victories around the world and 14 major championships, second only to the 18 professional majors won by Jack Nicklaus.

His endorsements — Nike, AT&T, Accenture, Gillette, Gatorade — have helped make him the first athlete to top $1 billion in earnings.

Aside from occasional criticism of his temper inside the ropes, he has kept himself out of the news outside his sport. In an October posting on his Facebook account, Woods wrote, "I'm asked why people don't often see me and Elin in gossip magazines or tabloids. I think we've avoided a lot of media attention because we're kind of boring. ..."

"He's an iconic brand, the platinum standard," said John Rowady, president of rEvolution, a Chicago-based sports marketing agency. "I find it interesting how he's being attacked by so many sides after how gracious he's been. But even the best of celebrities who try to do their best can be riddled with controversy."

Rowady said Woods has solid relationship with his sponsors, and they are not likely to drop him over what is known so far.

"Here's a guy that has a squeaky clean record," Rowady said. "He leads the king's life and everybody admires him. It's a personal matter, but his ability to come out and talk about it will be interesting. I'm sure he has a lot of pressure on him and is trying to avoid the rumors."

Nordegren, a former model from Sweden who once worked as a nanny for golfer Jesper Parnevik, is as private as Woods. She keeps a low profile at tournaments, watching her husband from behind the ropes, and moves on when photographers start taking her picture.

Asked at a Friday evening news conference if the couple could have been arguing, Saylor said he had no knowledge of that.

The accident came two days after the National Enquirer published a story alleging that Woods had been seeing a New York night club hostess, and that they recently were together in Melbourne, where Woods competed in the Australian Masters.

The woman, Rachel Uchitel, denied having an affair with Woods when contacted by the AP.

"I resent my reputation is getting completely blasted in the media," she said during a telephone interview late Friday. "Everyone is assuming I came out and said this. This is not a story I have anything to do with."

Uchitel said she was in Melbourne two weeks ago with clients and never saw Woods the entire time she was there.

"The story stands for itself," National Enquirer executive editor Barry Levine told the AP on Saturday.

#Police: Woods #wife unavailable for interview
You May Also like: