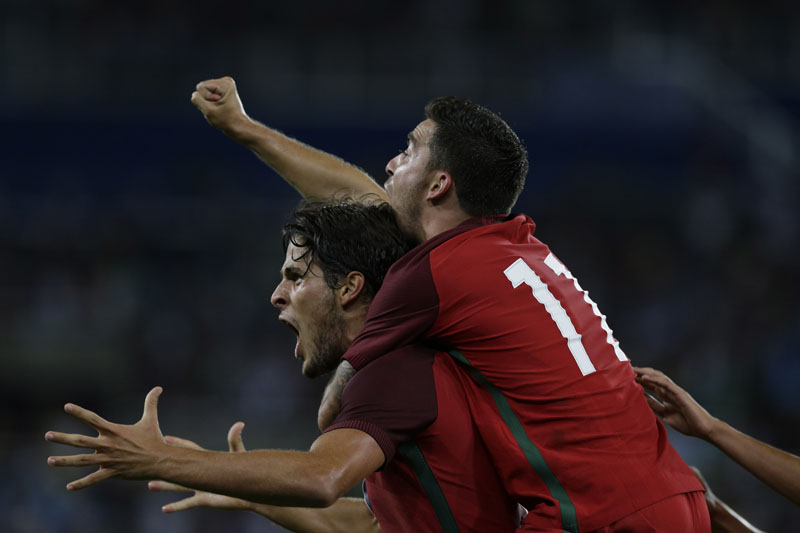 Portugal's Paciencia (bottom) celebrates scoring his side's first goal with his teammate Salvador Agra during a group D match of the men's Olympic football tournament between Portugal and Argentina at the Rio Olympic Stadium in Rio De Janeiro, Brazil, on Thursday, August 4, 2016. Portugal won 2-0. Photo: AP
RIO DE JANEIRO: Suddenly, Portugal's post-Cristiano Ronaldo era doesn't seem so daunting. The next generation of players from the country won their opening match at the Olympics on Thursday, beating Argentina 2-0 in Group D. Portugal won the European Championship last month, with the 31-year-old Ronaldo sidelined for much of the final with an injury. Teams from the country also won the under-17 European title and nearly won the under-21 title last year, too. Ronaldo could have played in Rio de Janeiro, with three players over the age of 23 allowed. But after playing at Euro 2016, the Real Madrid forward was never likely to participate at a second tournament. "Everybody wants to be like him but first of all we must learn," said 22-year-old striker Goncalo Paciencia, who scored Portugal's opener against Argentina. "We are a good generation. Portugal's reputation is going to get even higher," Paciencia said through a translator. It was a night to forget for Argentina, the Olympic soccer champion in 2004 and 2008. Goalkeeper Geronimo Rulli, who plays for Real Sociedad, let a shot from midfielder Pite squirm through his hands, under his body and over the goal line for Portugal's second goal in the 84th minute. "Sometimes it happens. It's the risk of being a goalkeeper," Argentina coach Julio Olarticoachea said through a translator. "It's not his fault we have lost." Paciencia put Portugal ahead in the 66th minute. Gifted space on the edge of the penalty area, Paciencia met Bruno Fernandes' cross and took a couple of touches before shooting past Rulli. Earlier at the Olympic Stadium in Group D, Honduras beat Algeria 3-2
#Portugal #Argentina #Rio de Janeiro #post-Cristiano Ronaldo #Portugal vs Argentina
You May Also like: