Pradhan set for third U-19 WC 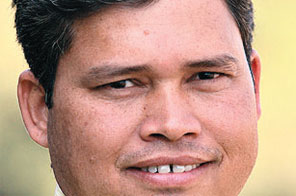 KATHMANDU: Nepal’s lone ICC Affiliate-Associate panel umpire Buddhi Bahadur Pradhan is leaving for New Zealand on Friday to officiate in the ICC Under-19 World Cup slated for January 15-30.
Pradhan, who has been selected for the third straight U-19 World Cup, will officiate in the two practice matches — Australia vs West Indies on January 11 and Hong Kong vs Canada on January 12 — before officiating as a TV Umpire in the match between India vs Afghanistan on January 15. He is scheduled to stand in the match between New Zealand vs Canada the next day. Other fixtures will be release as the tournament progresses.
In 2006, Pradhan officiated in six matches in Sri Lanka, while in 2008 he stood in eight matches in Bangladesh. Pradhan has already stood in 12 one-day matches and eight four-day matches but is yet to get a Test match experience. “I have stood in ODIs and first-class matches. I don’t know how long it takes to stand in the Test mathces but I am hopeful of getting a Test match in days to come,” said Pradhan.
Asked about his role model, Pradhan said Simon Taufel of New Zealand and Aleem Dar of Pakistan were the best umpires at the present. “I have shared the turf with top umpires in one-dayers and first class matches and I aim to stand along with these two umpires in Test matches,” said Pradhan, who has been officiating in the ICC-organised matches since 2004.
The mathematics and computer teacher at the Budhanilkantha Secondary English School in his home town of Biratnagar, Pradhan said the Nepali umpires were doing reasonabley good at the Asian level and a couple of umpires could come up in near future. “At present, three Nepali umpires — Sanjay Gurung, Vinay Kumar Jha and Durganath Subedi — are doing good job and they are competent enough to officiate in the international arena,” added Pradhan, who is also the president of the Umpires and Scorers Association of Nepal (USAN).

#Pradhan set for third U-19 WC
You May Also like: