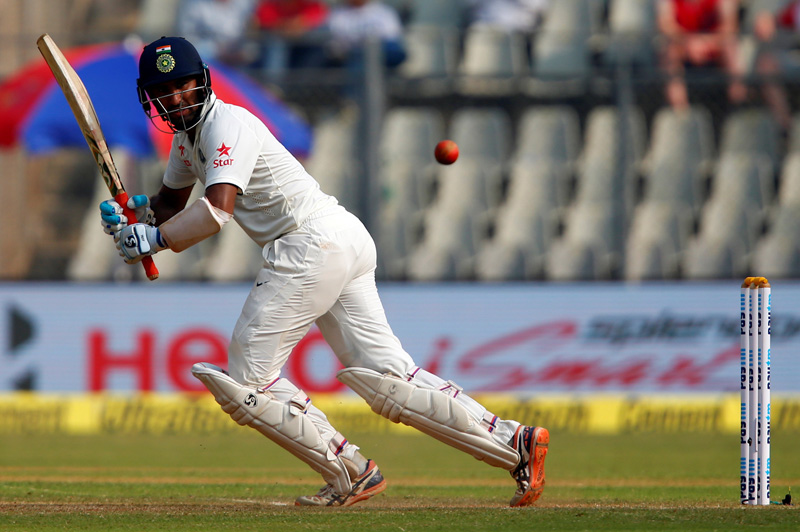 India's Cheteshwar Pujara plays a shot. Photo: Reuters
BENGALURU: India are confident they can end a string of batting collapses in their second innings and set Australia a competitive target to chase in the second test, batsman Cheteshwar Pujara said on Sunday. "We will have a different game plan in the second innings and at the same time we are confident of doing well. We will put up a better show in the next innings," Pujara said. READ ALSO The hosts were bundled out by Australia for 105 and 107 in their two innings in the series opener in Pune and scored 189 in their first essay after winning the toss and batting first in Bengaluru's M. Chinnaswamy Stadium. The 333-run thrashing in Pune ended a 19-match unbeaten streak for the world's top-ranked test side, who have won their last six series and posted 600-plus totals in their last three innings before Pune. While left-arm spinner Steve O'Keefe did the damage in the first test with a match haul of 12 wickets, off-spinner Nathan Lyon picked up 8-50 in the first innings in Bengaluru. "I think the most important think was we didn't get a good partnership. When we had partnerships things were getting easy for us but we kept on losing wickets," Pujara, India's number three batsman, told reporters. "I think there is nothing wrong with the Indian batting line-up and we are known to play spinners well. Apart from the last three innings, we have been batting well." Pujara said India were satisfied on Sunday with the efforts from their bowlers, who stopped Australia from scoring freely and gave away 197 runs in 90 overs on the second day. "We can see the run rate and they were not able to score many runs," Pujara said. "In a way, it was a victory for us and we bowled tight lines. Lengths were very good from the fast bowlers. We bowled well and took six wickets but they didn't score many runs." India have been found wanting in their use of the referral system, often losing their allotted quota by unsuccessful challenges. On Sunday, they let off Shaun Marsh on 14 by not reviewing the umpire's not-out verdict for a caught behind with replays showing the batsman had got a thin edge. Marsh went on to score 66. "We have been working on it. There was one incident where Shaun Marsh was out and we didn't take the review," Pujara said. "This was the time when they were already five down and if we had got another wicket it would have put some pressure on them."
#India #Australia #Virat Kohli #Steven Smith #Cheteshwar Pujara #TEST MATCH CRICKET
You May Also like: