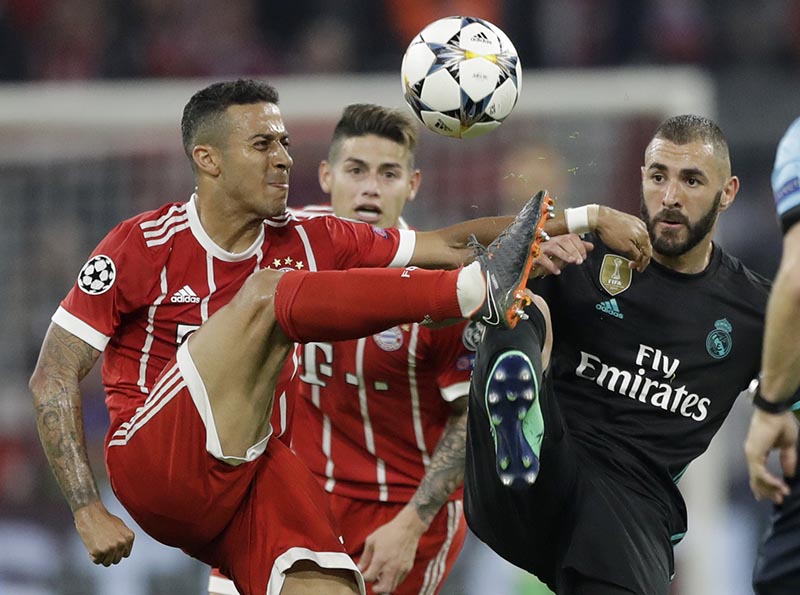 MUNICH: Holders Real Madrid came from a goal down to snatch a precious 2-1 victory at wasteful Bayern Munich on Wednesday and carry a considerable advantage into their Champions League semi-final second leg in Spain.

Real, eyeing a third straight title, needed a 44th-minute equaliser by Marcelo against the run of play to cancel out Joshua Kimmich's opener after Bayern, chasing three trophies this season, had missed a hatful of chances.

A quick break allowed Real substitute Marco Asensio to beat Sven Ulreich with a fine effort and grab the winner in the 57th minute.

There was more bad news for Bayern with Germany defender Jerome Boateng suffering a suspected adductor muscle injury that could rule him out for the final part of the season and the World Cup.

The result was identical to last year's quarter-final first leg between the teams before Real won the return game as well on the way to the first successful Champions League title defence.

"We are satisfied with the result but this does not count for much," Real coach Zinedine Zidane told reporters. "You can never feel absolutely safe in football.

"We won tonight and I think we played well, we got a good result after a hard game."

Liverpool crushed AS Roma 5-2 in the other semi-final first leg on Tuesday.

Bayern, who had lost only one of their last 22 home games in the competition, had only themselves to blame and were punished for their profligacy.

They almost scored after 25 seconds when Real defender Dani Carvajal failed to clear properly in a furious and physical start to the match.

The hosts' game plan seemed to go out the window after eight minutes with speedy winger Arjen Robben was forced off with an ankle injury.

They were undeterred by Real's early tight pressing game, however, taking the lead when Kimmich slotted home after a superb through ball from former Real player James Rodriguez.

The Bavarians should have scored again even after another setback when Jerome Boateng went off with a thigh muscle injury, with chances falling to Franck Ribery, Mats Hummels and Thomas Mueller.

But it was Real who struck against the run of play with a low drive from Marcelo a minute before the break as the Brazilian full back added to his goals against Paris St Germain and Juventus in previous rounds.

The Spanish side, who have had a disappointing domestic campaign, then caught the Germans napping after a defensive blunder as Asensio raced clear to score their second goal.

"It was a curious game," Bayern coach Jupp Heynckes said. "We gifted Madrid two goals through our mistakes. We had really good chances and we did not use them. One should not be surprised that we lost.

"When you have that many chances and you don't score then you cannot win."

Bayern struggled to recover from the blow and despite having nearly 60 percent of possession they could not find an equaliser.

The defeat snapped Heynckes's 12-game winning streak in the competition stretching back to 2013.